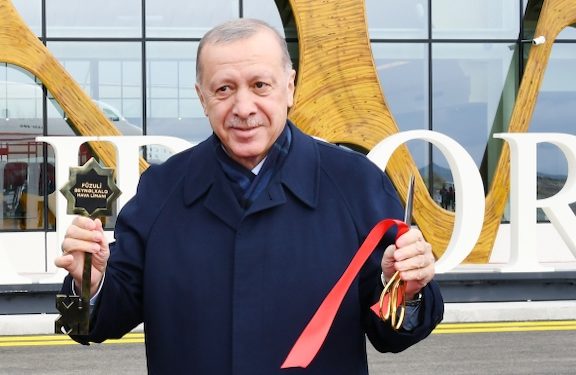 Turkish President Recep Tayyip Erdogan at the opening of an airport in occupied Varanda on Oct. 26

President Recep Tayyip Erdogan of Turkey on Tuesday said that his country was ready to normalize relations with Armenia, if Yerevan resolves its “outstanding issues with Baku.”

The Turkish leader, essentially, reiterated the preconditions he has always articulated that Armenia must recognize Azerbaijan’s post-war territorial integrity, which includes Artsakh.

Speaking at a press conference in occupied Artsakh, along with his Azerbaijani counterpart Ilham Aliyev, Erdogan said that the “environment in Karabakh is more favorable than ever before for lasting peace and progress toward the much-desired normalization,” reported the Anadolu news agency.

Saying that Turkey wants to support steps that guarantee peace in the region, Erdogan said that if Armenia shoes a “sincere will” toward peace with Azerbaijan, then Ankara will be open to normalizing relations with Yerevan, added Anadolu.

“We made history together and we stood united during the fight and now we stand together on these liberated lands,” Aliyev said about Turkey-Azerbaijan relations.