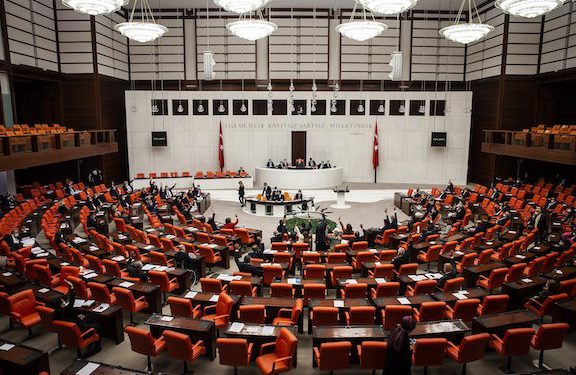 The Parliament of Turkey

Turkish President Recep Tayyip Erdogan’s office has submitted a request to lift the parliamentary immunity of 28 opposition lawmakers, including 25 from the pro-Kurdish People’s Democratic Party (HDP), among them Armenian member of parliament Garo Paylan.

On Monday, Turkey’s parliament received 40 files of summary proceedings, which will be reviewed by the legislature’s Joint Constitution and Justice Committee, reported the Hurriyet Daily News.

Last week, Turkey’s Prosecutor General’s office said it will investigate 26 Turkish lawmakers affiliated with HDP for calling on the Turkish government to recognize the Armenian Genocide.

The lawmakers are charged with “offending the Turkish state,” based on the notorious Article 301 of Turkey’s Criminal Code, for a statement that was made on April 24 of this year, the T24 news website reported on December 27.

During the party’s Central Executive Body meeting on April 24, the HDP called on Turkey to recognize the killings of 1.5 million Armenians in the Ottoman Empire as genocide, and this sparked Ankara’s heated reactions.