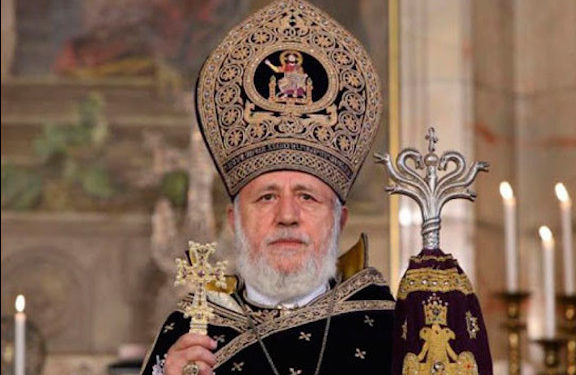 Karekin II, Catholicos of All Armenians

YEREVAN (Azatutyun.am)—The Armenian Apostolic Church on Friday dismissed religious reasons given by its believers refusing to be vaccinated against the coronavirus.

Meeting in Echmiadzin, the church’s Supreme Spiritual Council headed by Catholicos Karekin II expressed “deep concern” over record coronavirus cases and deaths registered in Armenia in recent weeks. It stressed in that regard that “vaccination does not pose a spiritual danger,” according to a statement released by the Catholicos’ office.

“It was deemed important that in the current conditions of the pandemic individual freedom be strictly combined with social responsibility for the sake of not endangering one’s own and others’ lives,” said the statement.

The council, which comprises not only high-ranking clerics but also well-known laymen, said at the same time that health authorities must “prevent the spread of contradictory information regarding the benefits and consequences of vaccination.” It did not elaborate.

Armenian has the lowest vaccination rate in the region and Europe, with only about 10 percent of its population having been inoculated against COVID-19 so far. Widespread vaccine hesitancy in the country is driven in part by religious objections voiced by some members of the Armenian Apostolic Church and religious minorities.

An Armenian parish priest sparked controversy late last month after openly questioning the efficacy of coronavirus vaccines during a sermon delivered in a village church just outside Yerevan. Father Grigor Hovannisian claimed that God sent the virus to the world as punishment for its sins.

“Our spiritual servants must be very careful in their statements because they have followers in their churches and can cause a great deal of damage with their emotional talk,” its chief spokesman, Bishop Vazgen Mirzakhanian, told RFE/RL’s Armenian Service on October 25.

Mirzakhanian said that Karekin II and many other clergymen have been vaccinated and that he is also going to follow their example.