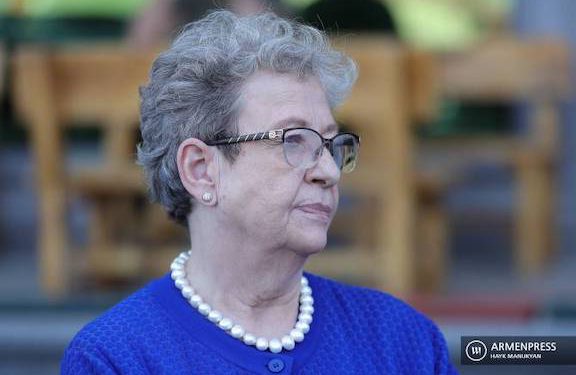 A group of ambassadors representing European countries, as well the European Union’s Head of Delegation to Armenia visited Syunik on Thursday to gain first-hand knowledge of the week-long border standoff, which started when Azerbaijani forces breached the sovereign border of Armenia in the Syunik Province and advanced several kilometers into the Sev Lidj “Black Lake” region with a reported 250 soldiers currently camped out in Armenia proper.

“I have heard about a few maps. Today we were shown the map of 1969. I am not an expert and cannot express a concrete opinion, but it was obvious from today’s map that greater part of the Black Lake is located in the territory of the Republic of Armenia,” EU’s Head of Delegation Ambassador Andrea Wiktorin told reporters.

Before visiting the Sev Lidj area, Armenian Armed Forces corps commander Samvel Minasyan presented to the Ambassadors the map of the Armenian SSR of 1969 ratified by documents, signatures and stamps.

Wiktorin said the EU uses all its levers for contributing to a resolution of the situation and that the European Union firmly supports territorial integrity.

Minasyan briefed 11 ambassadors of European countries and 3 representatives of the European Union who visited Goris on a fact-finding mission to assess the situation at the Armenian-Azerbaijani border in the Black Lidj area.

Azerbaijani troop movement to Sev Lidj was detected as of 7 a.m. on May 12, Minasyan told the European envoys, adding that the actual incursion took place at night.

“Before May 12, the Armenian military units were located near the state border and were carrying out border protection. The Azerbaijani servicemen were carrying out combat shifts on the opposite side. In December of 2020, during border adjustments the servicemen of Armenia and Azerbaijan had,” Minasyan said.

The initial 250 Azeri troops who invaded the territory were from various branches of the Azeri military, the border guards and the special forces, explained Minasyan who added that the situation is under control and that the Armenian units are located in conditions of direct contact with Azerbaijani forces.

The ambassadors asked Minasyan whether Azerbaijan had been accumulating troops along the border. Commander Minasyan told the envoys that Azerbaijan is amassing forces at the border adding that “reconnaissance drones were also detected.”

Ambassador Wiktorin, the EU Head of Delegation, also told reporters that the European Union is concerned about the issue of the Armenian prisoners of war, who are being held captive in Azerbaijan, referring to Thursday’s debate in the European Parliament about the issue.

“I am expressing my respect and support to the families of the POWs, whom I met and regularly meet with. This is the issue which must be raised at all levels,” said Wiktorin.

Under Pressure, Pashinyan Confirms Another ‘Secret’ Accord with Baku