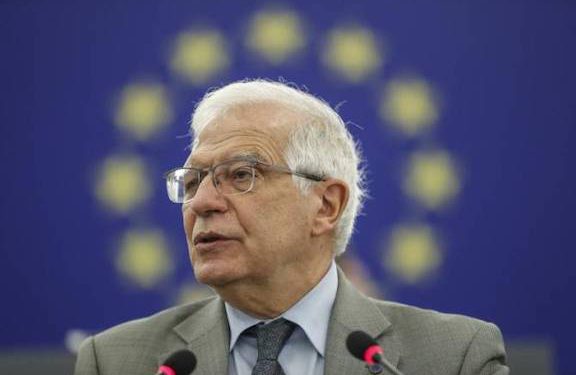 The European Union welcomed the actions taken by Armenia and Azerbaijan and facilitated by Georgia that led to the release by Azerbaijan of 15 Armenian detainees and the handing over by Armenia of maps of mined areas on June 12, EU’s High Representative for Foreign Affairs and Security Policy Josep Borrell said in a statement released on Sunday.

“These are important humanitarian and confidence building gestures by Baku and Yerevan that will hopefully open the path for further cooperation between the sides and the ultimate release of all Armenian detainees, as well as the handing over of all available maps of mined areas to avoid further civilian casualties.

The European Union and other international actors have actively encouraged moves in this direction and we urge further cooperation between the countries involved.

We will continue to promote a durable and comprehensive settlement of the conflict, including where possible through support for stabilization, post conflict rehabilitation and confidence building measures and reiterate our call on Armenia and Azerbaijan to reengage in substantive negotiations under the auspices of the OSCE Minsk Group Co-Chairs,” added the statement.

France, which is one of the Co-Chairing countries of the OSCE Minsk Group also welcomed Azerbaijan’s release of 15 Armenian detainees as well as Armenia’s transmittal of maps to minefields in the Azerbaijani district of Aghdam, the France’s foreign ministry said in a statement.

“This is an important gesture toward helping to deescalate tensions and rebuilding trust between the parties with the aim of achieving a lasting peace in the Caucasus,” added the statement.

“France calls on the parties to continue consolidating the ceasefire; the full and effective implementation of the commitments included in the agreement reached by the parties on November 9, 2020, allowing in particular for the release of all detainees still in custody; and a substantive dialogue to build a lasting political solution. We are continuing to work resolutely with the parties and our partners, the Co-Chairs of the Minsk group, to contribute to this effort,” the statement reads.

Secretary of State Antony Blinken on Saturday was quick to welcome the release of the 15 prisoners of war.