EU Representative Sums of Trip to Yerevan and Baku 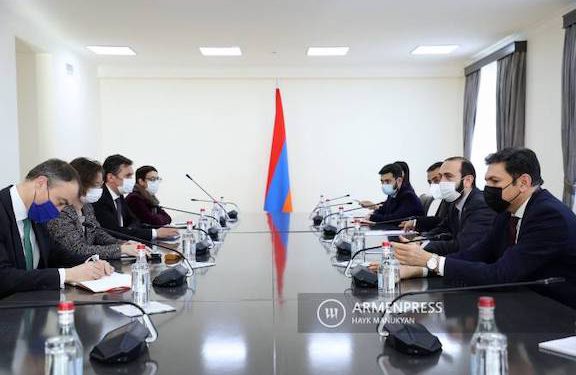 The European Union’s Special Representative to the South Caucasus, Toivo Klaar, who recently visited Yerevan and Baku, summed up the result of his trips, saying that he had substantive conversations with the leaders of the two countries.

Klaar said the meetings provided an opportunity us to follow up on the substantive discussions that Prime Minister Nikol Pashinyan and Azerbaijan’s President Ilham Aliyev had with President Charles Michel in Brussels in December, as well as on their meeting with President Emmanuel Macron following the Eastern Partnership Summit.

Klaar visited both Baku and Yerevan on January 21 and 22, accompanied by Adviser to the French President Isabelle Dumont, as well as Magdalena Grono, Adviser to President of the European Council Charles Michel and Brice Roquefeuil, Ambassador for the Eastern Partnership in the French Foreign Ministry.

Klaar told News.am that the format of this visit was quite unique and allowed for substantive discussions between their delegation, Azerbaijani President Ilham Aliyev and Armenian Prime Minister Nikol Pashinyan, among others.

“The aim was to deepen our engagement on a variety of topics and to identify options for further EU engagement with the sides, including on such issues as de-escalation of tensions and ways to avoid further clashes on the ground, border delimitation, addressing humanitarian issues, including the release of detainees, the fate of missing persons and de-mining efforts, and the importance of restoring communications infrastructure between Armenia and Azerbaijan, while fully respecting the sovereignty of all countries,” said Klaar.

On all these issues, President Michel has been closely involved for some time already and several agreements have already been reached, including the established—and well-appreciated—direct communication link between the ministers of defense of both countries and the EU-facilitated handover of 10 Armenian detainees from Baku to Yerevan on December 19, Klaar explained.

“In addition, we continued our discussions with the leaderships about President Michel’s offers for additional support for de-mining efforts, including by providing expert advice, as well as for EU political and practical support to reduce tensions on the border and for delimitation and demarcation discussions. On all these issues, I can say that we have had positive talks in both Baku and Yerevan. We will be continuing our strong engagement with our partners Armenia and Azerbaijan in all these areas,” Klaar added.

Klaar also told News.am that the EU fully supports normalization of relations and opening of communications between Armenia and Turkey as an important objective to ensure lasting peace in the region.

“We also support the upcoming resumption of flights between Yerevan and Istanbul and other high-level contacts between Armenian and Turkish officials, such as the contacts within the so-called ‘3+3’ platform and other possible contacts in the framework of the Antalya Diplomacy Forum,” Klaar stressed.

The EU’s special representative said that while in Yerevan last week, he “had a very interesting exchange of views on these issues” with Ruben Rubinyan, Armenia’s special envoy on normalization of relations between Turkey and Armenia.

“It seems to me that his [Rubinyan’s] first meeting with his Turkish counterpart held in Moscow on December 14 was commended by both sides. The EU welcomes this effort and is ready to contribute to any further positive development in this direction, provided the sides show corresponding interest,” said Klaar.

“As stated by several Armenian officials recently, including at the level of Prime Minister Pashinyan, we expect this process to bring stability and prosperity to the peoples in the region and we hope to see additional concrete steps in this direction in the near future. It is my hope that it will result in agreements for the long-awaited establishment of diplomatic relations and opening of the Turkish-Armenian border,” stressed Klaar.