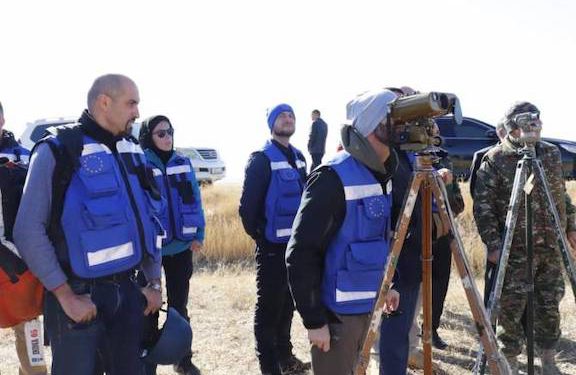 EU monitors in Armenia in November, 2022

The objective of the Mission is to contribute to stability in the border areas of Armenia, build confidence on the ground, and ensure an environment conducive to normalization efforts between Armenia and Azerbaijan supported by the EU.

“The establishment of an EU Mission in Armenia launches a new phase in the EU’s engagement in the South Caucasus. The EU will continue to support de-escalation efforts and is committed to work closely with both sides towards the ultimate goal of sustainable peace in the region,” said Josep Borrell, EU High Representative for Foreign Affairs and Security Policy.

In response to Armenia’s request, EUMA will conduct routine patrolling and report on the situation, which will strengthen the EU’s understanding of the situation on the ground. The Mission will also contribute to the mediation efforts in the framework of the process led by President of the European Council Charles Michel.

EUMA will have an initial mandate of two years and its Operational Headquarters will be in Armenia. The Civilian Operation Commander will be Stefano Tomat, EEAS Managing Director of the Civilian Planning and Conduct Capability. A Head of Mission leading operations on the ground will be appointed in the near future.

The EUMCAP became fully operational on October 20, 2022. It conducted a total of 176 patrols and completed its activities, as agreed in Prague, on December 19, 2022.

In a letter to the High Representative received on December 27, 2022, the Foreign Minister of the Republic of Armenia invited the EU to deploy a civilian CSDP mission in Armenia.

Armenia on Monday welcomed the EU’s decision on the mission.

“We very much welcome the EU’s decision to send a fully-fledged civilian mission to Armenia. We will readily cooperate with the mission and support its activities. This mission will contribute to the peace, stability and security of the region,” Foreign Minister Ararat Mirzoyan said in Twitter post.

Russian Foreign Minister Sergei Lavrov scoffed at EU’s intentions to send a monitoring mission, saying that such an effort might do more damage than good. He also called into question Armenia’s intentions for asking the EU for the mission, saying the Russia-led Collective Security Treaty Organization had approved its own mission to Armenia, which had not responded to that offer.

“Despite the fact that Russia and Armenia are allies and despite the fact that this mission is completely ready, Armenia has preferred to make an arrangement with the European Union in order to deploy a civilian monitoring mission on the border with Azerbaijan on a long-term basis,” Lavrov said at a new conference last Wednesday.

Lavrov said that it was within Armenia’s rights to agree to a mission from the EU. However, he said, “we must not forget that it’s about the border with Azerbaijan, and probably, if this mission is deployed without Azerbaijan’s consent, it may be ineffective.”

“Instead of strengthening confidence on the border, it can create additional tension,” Lavrov added.