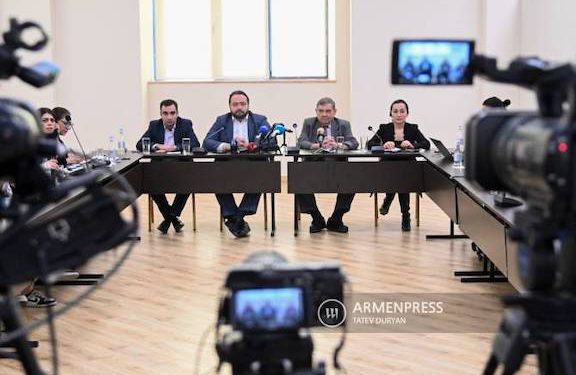 Members of the European Parliament, who are on a fact-finding mission in Armenia, strongly condemned Azerbaijan for its aggression and breach of Armenia’s territorial integrity. They also warned that if Artsakh falls under Azerbaijani rule the threat of ethnic cleansing will be fraught.

The delegation, whose trip to Armenia was organized by the European Armenian Federation for Democracy and Justice, held a press conference on Thursday to sum up their findings, which they said will be shared by their fellow lawmakers, as well as the relevant European authorities.

European Parliament member Fabio Massimo Castaldo, who is leading the delegation, said at the press conference that the information his group collected during the trip point to the fact that Azerbaijan has attacked the sovereign territory of Armenia raising serious concerns among the team’s members.

He also emphasized the atrocities committed against Armenian soldiers and prisoners of war by the Azerbaijani armed forces, and called for the need to hold those responsible accountable for their actions.

“We hope those found guilty will be held accountable. It is very important for us to continue such efforts, which are part of our commitment,” said Castaldo. “We condemn the fact that Azerbaijan has not yet returned the prisoners of war after 2020, and we have voted in favor of a resolution which condemned the encroachments against the Armenian cultural landmarks,” he said.

Castaldo said that he and his delegation visited Armenia’s Syunik province and saw the consequences of the Azerbaijani bombardment.

“The civilian population cannot live under such threats,” the European Parliament member said. He called for continued diplomatic efforts to ensure that any conflict is settled only through negotiations.

He said that while the European Parliament cannot impose sanctions, but explained that its members have the right to appeal to relevant bodies in the EU that can make such determinations.

As for Artsakh, Castaldo emphasized that a settlement to the Karabakh conflict was necessary for the people of Artsakh, and such a resolution cannot be imposed through, what he called, “diplomatic blackmail.”

The delegation had expressed earlier in the week that forcing Artsakh to be part of Azerbaijan is fraught with threats of ethnic cleansing. This position was articulated during a on Tuesday during meeting with member of the opposition factions of the Armenian parliament.

The European delegation member voiced frustration about how many European structures have adopted policy of double standards, and in the current geopolitical situation energy interests have seemed to superseded the principles of international law.

During their visit, the European Parliament lawmakers also met with members of the ruling party represented in Armenia’s legislature, as well as Catholicos Karekin II.