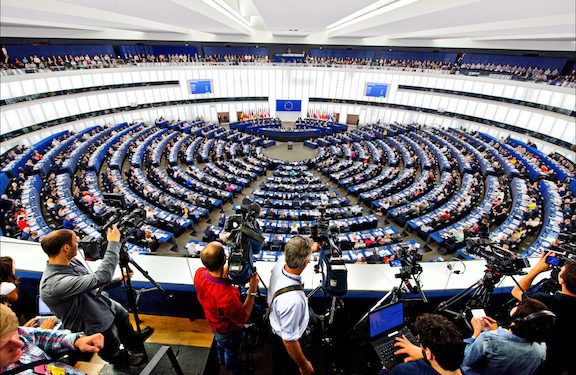 BRUSSELS—The European Armenian Federation for Justice and Democracy welcomed the passage of an urgent resolution by the European Parliament, demanding the unconditional release of all the Armenian prisoners of war and captives, still illegally detained by Azerbaijani.

The joint cross-party resolution which was co-signed by 47 Members of the European Parliament, representing the five largest political groups in the parliament, was adopted Thursday by an overwhelming majority. The voting took place after a plenary session, during which several lawmakers firmly condemned the Azerbaijani barbaric behavior towards the Armenian POWs and called on the EU to take an active part in the process of their release.

The European Parliament expressed deep concern about reports on the degrading conditions, the inhumane treatment and torture of many Armenian hostages by the Azerbaijani authorities. Furthermore, the European Parliament called on Azerbaijan to strictly respect the international humanitarian law, according to which the ill-treatment of POWs is a war crime.

In addition, the resolution calls on the Azerbaijani government to fully cooperate with the European Court of Human Rights by providing an exhaustive list of all persons held in its captivity and detailed information on their conditions of detention and state of health. As a member-state of the Council of Europe, Azerbaijan is mandated to comply with the interim measures of the ECHR—something that the Azerbaijani authorities have failed to do.

In addition to the issue of Armenian POWs, the resolution criticizes the latest incursion by the Azerbaijani armed forces in Armenia’s sovereign territory and the violation of its territorial integrity as well as of international law. The European Parliament also deplored the increased level of hate speech and anti-Armenian state policy in Azerbaijan, particularly the opening of the so-called “Trophy Park” in Baku and urges that it be closed without delay.

The European Parliament reiterated its full support to the efforts of the OSCE Minsk Group Co-Chairs and their mandate to find a sustainable peaceful solution for the conflict based on the OSCE 2009 Basic Principles, including the right for self-determination of the peoples. To conclude, the resolution also emphasized the urgent need to send humanitarian assistance and to ensure the security of the Armenian population and its cultural heritage in Nagorno Karabakh.

“With the resolution adopted by the European Parliament, the European Commission and the EEAS have an additional powerful tool in their possession to act more concretely and use all their political and diplomatic leverage for the return of all the Armenian captives,” said EAFJD president Kaspar Karampetian.

“It is an absolute disgrace that the Azerbaijani authorities are using this humanitarian issue as a bargaining chip for more geopolitical or territorial gains. The rights of the Armenian POWs to be treated humanely and to be released regardless of the circumstances of their detention are guaranteed by international conventions signed also by Azerbaijan. Since the end of the war, Azerbaijan is violating all of them,” added Karampetian.

“It is also important that with this resolution the European Parliament clearly criticized the ongoing violation of sovereignty and territorial integrity of the Republic of Armenia by Azerbaijan. The Azerbaijani invasion must be firmly condemned by the international community,” concluded Karampetian.