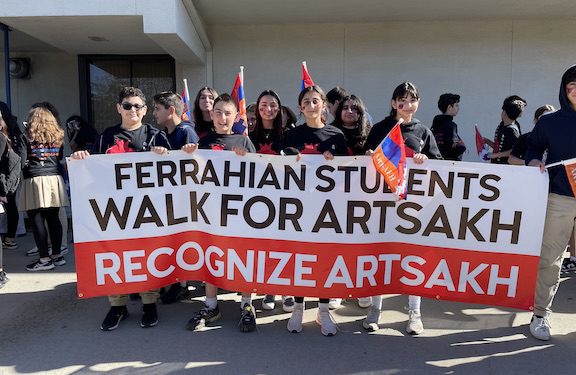 On the 40th day of Azerbaijan’s illegal blockade of the Lachin corridor — the single, life-preserving route that connects Armenia with Artsakh — Holy Martyrs Ferrahian Armenian middle and high school students rallied for an end to the blockade while waving Artsakh flags and demanding justice. The “Walk for Artsakh” rally was a near 4-mile walk that began at the school’s campus and led students and community activists through main streets of Los Angeles.

“They don’t have electricity, they don’t have gas, they can’t do anything. Can you imagine waking up in the cold?” said one student during the Walk for Artsakh. For over five weeks, the 120,000 Armenians in Artsakh have been facing severe food insecurity, gas shutoffs, power outages, and a lack of essential medical and health supplies. Families are forced to endure a cold near 20-degree winter without the ability to heat their homes. 30,000 children remain without access to education, as schools are forcibly closed due to shortage of gas and constant blackouts.

The blockade is a continuation of Ilham Aliyev’s genocidal policies against the Armenians of Artsakh. In recent statements made in Baku, Aliyev all but announced that the indigenous Armenians of Artsakh are more than welcome to leave if they do not agree to become citizens of Azerbaijan. The blockade of the corridor employs “starvation as a means of warfare”: a tactic that is prohibited under the Geneva Conventions.

“Families have been torn apart. Children have been cut off from their parents by the senseless cruelty of the Aliyev regime,” said Sossi Shanlian, the principle of the Ferrahian High School during the rally. “Azerbaijan has been routinely cutting off the people of Artsakh access to electricity and gas, a dire prospect now in the dead of winter. This is unacceptable. It must be stopped! This march today is only one step to be taken in support of our brothers and sisters of Artsakh. The Armenian Diaspora in the United States must contact their representatives and demand that the US Government sanction Azerbaijan for the gross violations of human rights.”

On Wednesday, January 18, 2023, five members of Congress, including Congressman Adam Schiff and Frank Pallone, sent a letter urging the Biden Administration to use “maximum pressure” on Aliyev to end the blockade immediately, and to send humanitarian aid to the people of Artsakh.

The Pan-Armenian Council of the Western Region has created the #SaveArtsakh campaign, which allows site visitors to easily call and email The White House demanding the President to do the following:

On Friday, January 13, Rose and Alex Pilibos Armenian School and Ferrahian High School students also participated in a silent protest in front of the Crypto.com Arena to amplify the dire situation in Artsakh after their varsity basketball game and demand immediate action from the Biden Administration.