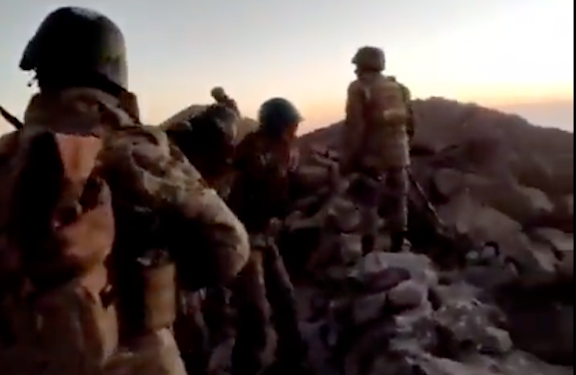 “In terms of authenticity, we believe there is no doubt, this is the typical mode of operation of the Azerbaijani armed forces. This signature is known to us and the international community from the undeniable evidence of similar cases that happened in the past as well,” Defense Ministry spokesperson Aram Torosyan told Armenpress on Monday.

Armenia’s Human Rights Defender Kristinne Grigoryan confirmed the authenticity of the video and said that her office’s analysis indicated that the video was captured immediately after Azerbaijani forces launched a large-scale attack on September 13 on Armenia’s sovereign territory.

The video that began circulating on social media platforms on Sunday shows a group of Azerbaijani soldiers brutally executing Armenian soldiers they had captured during the Sept. 13 attacks.

Asbarez has reviewed the footage and spoke to sources in Yerevan, who confirmed in authenticity. However, due to the graphic nature of the video the publication has opted not to publish it.

“The incident [captured on the video] occurred during the large-scale attack by the Azerbaijani armed forces on the sovereign territory of the Republic of Armenia on September 13 of this year.
This fact is confirmed by a combination of aspects including the examining the area, similar video materials in our and other databases, as well as by a complex combination of weather conditions, uniforms of military personnel, the conversation of Azerbaijani servicemen, and other ascpects,” Grigoryan, the Human Rights Defender said in a statement.

“This is yet another war crime committed by the Azerbaijani armed forces, the source of which is a ongoing policy of Armenophobia by Azerbaijan, manifesting itself starting from the educational content in all spheres of public life and in the statements of the President of this country himself. By the way, this was also recorded in the recent report of the UN Committee on the Elimination of Racial Discrimination concerning Azerbaijan,” added Grigoryan.

Armenia’s Foreign Ministry on Monday demanded a clear assessment of the appalling war crimes committed by the Azerbaijani armed forces in this and previous periods.

“Numerous videos regularly publicized by Azerbaijani social media users demonstrate the war crimes, extrajudicial killings of Armenian prisoners of war, torture of Armenian servicemen, including women, and desecration of corpses committed by the Azerbaijani armed forces,” the foreign ministry said in a statement.

“We will consistently continue to voice the issue within relevant international platforms and courts and bring to justice the perpetrators and organizers of the aforementioned crimes, including by applying nternational sanctions. In this context, a due international investigation is imperative,” the foreign ministry said.

“At the same time, the international community is obligated to increase pressure on Azerbaijan for the immediate repatriation of all Armenian prisoners of war and civilians illegally held in Azerbaijan, clarification of cases of enforced disappearances, and the fates of the missing persons,” the foreign ministry added.

Prime Minister Nikol Pashinyan vowed to use all available international mechanisms to ensure the investigation and accountability into the extrajudicial executions of Armenian prisoners of war by Azerbaijani troops.

“Yet another horrific video circulated in social media: Azerbaijani soldiers are arbitrarily executing group of Armenian POWs on sovereign Armenian territory,” Pashinyan said in a social media post on Monday.

“The international community should strongly condemn & address this war crime & take appropriate measures to halt Azerbaijan’s aggression. Armenia will use all available international mechanisms to ensure investigation and accountability. Such acts of violence should be addressed properly, with consequences for the aggressor,” Pashinyan tweeted.

The attorney representing Armenia in the European Court of Human Rights and the International Court of Justice said Monday that they have added the viral video of the execution as part of the evidence package being presented to these legal institutions, with an emphasis on the fact that Azerbaijan has violated the fundamental rights of Armenians.

Also sounding the alarm was Armenia’s former president Armen Sarkissian, who in a statement called the atrocities depicted in the video a war crime.

“The continuous atrocities by the Azerbaijani armed forces against Armenian prisoners of war are a war crime. The international community and institutions should give a proper and targeted response to those crimes,” said a statement issued by Sarkissian’s office.