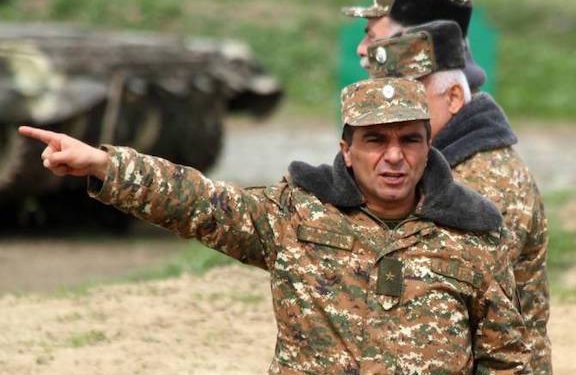 YEREVAN (Azatutyun.am)—Armenian law-enforcement authorities sought on Wednesday an arrest warrant for a former commander of Nagorno-Karabakh’s army who is facing criminal negligence charges stemming from the 2020 war with Azerbaijan.

Lieutenant-General Mikael Arzumanyan was arrested and indicted immediately after entering Armenia from Karabakh earlier this week. He was set free on Wednesday following the expiry of a three-day preliminary detention period set by Armenian law.

The Investigative Committee moved to arrest Arzumanyan again, asking a court in Yerevan to remand him in pre-trial custody. The court was due to consider the petition later in the day.

In a statement, theInvestigative Committee claimed that Arzumanyan failed to properly perform his duties after being appointed as commander of Karabakh’s Armenian-backed Defense Army on October 27, 2020, one month after the outbreak of the war. The law-enforcement agency specifically blamed him for the capture by Azerbaijani forces of the strategic Karabakh town of Shushi which occurred less than two weeks later.

The statement said Arzumanyan did not deploy more troops around Shushi in the days leading up to the town’s fall and misled the public about the situation on the ground.

The Hraparak newspaper cited his lawyer as saying that the general rejects the accusations leveled against him.

Arzumanyan, 49, was replaced by another Karabakh general last year. He has worked as an advisor to Arayik Harutiunyan, the Karabakh president, since then.

Harutiunyan on Tuesday voiced support for Arzumanyan through his spokeswoman, who described the latter as “one of our best military commanders.”

“His efforts made during the 2020 war are also undeniable,” the official, Lusine Avanesyan, told the Artsakhpress news agency. “True, he took command of the army only 12 days before the end of the war, but he made large-scale efforts to conduct military operations effectively.”

Armenian opposition leaders questioned the credibility of the charges leveled against the Karabakh general. They included Seyran Ohanian, a former defense minister who was hastily named to coordinate the defense of Shushi just days before the town’s capture.

“Mikael Arzumanyan was the [wartime] commander of the Defense Army for only 10-12 days,” Ohanian told RFE/RL’s Armenian Service on Wednesday. “It was hard to turn things around in that situation.”

“Everyone except the supreme culprit is guilty,” Artur Vanetsian, a former National Security Service director, said in a sarcastic Facebook post.

The Armenian opposition holds Pashinian primarily responsible for the outcome of the six-week war stopped by a Russian-brokered ceasefire on November 9, 2020. The prime minister has put the blame on Armenia’s former leaders.

Arzumanyan took over as Karabakh army commander after his predecessor, Jalal Harutiunyan, was seriously wounded in an Azerbaijani missile strike. Harutiunyan was appointed to a senior military position in Yerevan after recovering from his wounds. He is not known to be facing any criminal charges.