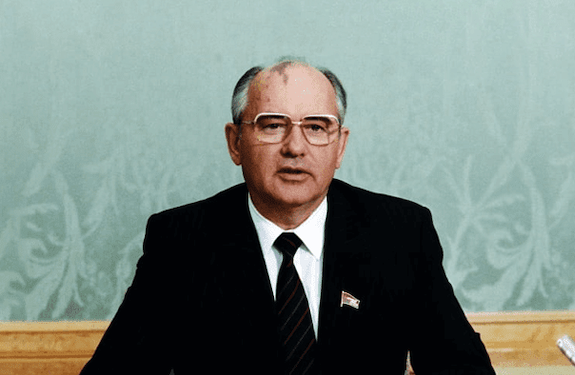 Former Soviet Leader Mikhail Gorbachev, whose policies of Glasnost and Perestroika, resulted in the collapse of the Soviet Union, has died. He was 91.

His death was announced on Tuesday by state-run Russian news agencies, adding that he had died after an unspecified “long and grave illness.”

Gorbachev’s ascent to power as the leader of the Soviet Union and his swift instituted his agenda of advancing openness in the insularly closed society and with it brought sweeping changes in a world weighed down by the perils of the Cold War.

Armenia and Armenians, taking advantage of the Gorbachev reforms, took to the streets in 1988 to demand environmental reforms plaguing the smallest of the Soviet republics, which housed decaying industrial complexes creating hazardous conditions, such as the Nairit Rubber plant and Medzamor Nuclear Power station to name a few.

Soon, those demonstrations became the Karabakh Liberation Movement, when in February 1988 hundreds of thousands of Armenians in Yerevan and Stepanakert demanded the reunification of Artsakh with Armenia.

In response to calls for reunification and self-determination, the Soviet Azerbaijani government launched the wide-spread pogroms of Armenians beginning in the city of Sumgait. At the time, it was widely reported that Soviet OMON forces assisted the Azerbaijani in massacring Armenians in Sumgait and later in Kirovabad and Baku.

Gorbachev was the leader of the Soviet Union on December 7, 1988 when the massive earthquake hit Armenia, killing an estimated 25,000 people. In hindsight, the earthquake relief efforts that mobilized the entire Armenian nation with Diaspora communities organizing to provide assistance, can be seen as a window into the Soviet despair that plagued Armenia, giving the Diaspora a foothold into the homeland that they dreamed about.

For Gorbachev the Armenian earthquake was one of the worst natural disasters in Soviet history. The vast empire was reeling from the its invasion and military involvement in Afghanistan with its economy on the downturn. He and his wife, Raisi, visited Armenia in the aftermath of the earthquake and promised assistance and support not only for the victims and their families, but also to Armenia.

The earthquake also opened a similar window to the West, whose leaders also pledged assistance in the wake of the tragedy. Famously, Vice-President George Bush was dispatched to Armenia as a show of the United States’ support to the people of Armenia—and to the Soviet Union.

The Karabakh issue continued to persist, and soon, despite promises of openness, the Gorbachev regime was employing tactics more in line with his predecessors.

The leaders of the Karabakh Movement were jailed and taken to Moscow where they remained in custody and brutal ethnic cleansing of Armenians by Azerbaijani forces continued. Gorbachev ordered the Red Army onto the streets of Yerevan where clashes with Soviet troops resulted in deaths.

As the pogroms in Baku were underway in January 1990, the Red Army was also dispatched there creating chaos. Did the Soviet forces stop the pogroms or were their clashes with aggressive Azerbaijani become a turning point in the conflict, which raged into full-blown war?

In an article he penned for globalaffairs.ru in March, 2021, Gorbachev reflected on the Karabakh conflict, saying that behind the “façade” of the rapprochement of the Soviet peoples, there were acute problems, the solution of which no one was looking for. According to him, Stalin viewed any nationalist issue as anti-Soviet, oppressing them rapidly.

“It was inevitable that in the conditions of democratization and great freedoms all that would come to light. It must be admitted that we did not initially realize the scale and severity of the problem, but when it arose, we could not act on the methods of pressure and restraint,” Gorbachev wrote.

“When the Nagorno-Karabakh conflict escalated in 1988, it was the basis. The roots of the conflict were old, there was no simple solution then and there is none now, although they tried to convince me that the solution of the problem can be achieved by redrawing the borders. There was a common opinion in the country’s leadership, that it was unacceptable. I thought that the agreement on the status of Nagorno Karabakh should be left to Armenians and Azeris, and the role of the union headquarters was to help them resolve the situation, in particular, by solving economic issues. I am convinced that it was the right line,” Gorbachev wrote.

He noted that neither the party bodies nor the intelligentsia of the two republics were able to come to a dialogue. “The extremists pushed them aside. Events snowballed. At the end of February 1988, blood was shed in Sumgait. It was necessary to deploy troops to stop the massacre,” Gorbachev wrote.

He says during that period, 1987-1988, he sought to develop a common democratic approach to inter-ethnic disputes, according to which national problems could be resolved in the general context of political and economic reforms.

Alas, almost 35 years later, bloodshed continues as Azerbaijan, determined to push its own agenda, is engaged in the same inhumane tactics as it did when the authorities of the time conceived and executed the pogroms, for which justice is still illusive.

Of course, Gorbachev became the darling of the West, the leaders of which, especially the U.S., viewed him as a “reformist.” The West leveraged Gorbachev’s visions and intentions and, as a result, saw the dissolution of the Soviet Empire and the lifting of the proverbial Iron Curtain.

Today, however, the West is pitted against Russia in a conflict that is extremely reminiscent of the Cold War, with higher stakes given the developments of the past three and a half decades.