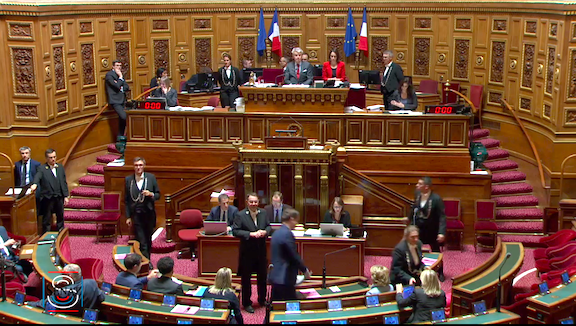 The French Senate ahead of a vote to impose sanctions on Azerbaijan on Nov. 15

YEREVAN (Azatutyun.am)—The leaders of France’s mainstream opposition parties have called on President Emmanuel Macron to protect Armenia and Nagorno-Karabakh and push for Western sanctions against Azerbaijan.

In an op-ed published by the French daily Le Monde on Tuesday, they condemned the continuing Azerbaijan blockade of Karabakh’s sole land link with Armenia, saying that it has put the Armenian-populated region on the brink of a “humanitarian catastrophe.”

“We ask the president of the Republic … to do everything possible to guarantee, in a lasting manner, the security of the Armenians of Nagorno-Karabakh and the Republic of Armenia,” reads the article signed by 11 French politicians.

They said France should also establish “humanitarian presence” in Karabakh, provide “urgent economic aid” to Armenia and get the European Union and the United States to impose “economic and political sanctions” on Azerbaijan.

Aliyev defended the government-backed Azerbaijani protesters who blocked the corridor on December 12 on ostensibly environmental grounds. He told Macron that they are right to protest against “illegal” mining activities in Karabakh.

The French opposition leaders reminded Macron of recent resolutions by both houses of France’s parliament that accused Azerbaijan of military aggression against Armenia and urged Paris to consider imposing sanctions on Baku.

Macron’s government distanced itself from those resolutions, with the French Foreign Ministry saying on November 30 that they “do not represent an official government position.”

Azerbaijan strongly condemned the pro-Armenian resolutions. Aliyev pointed to one of those texts when he objected to Macron’s participation in his fresh meeting with Armenian Prime Minister Nikol Pashinyan which was scheduled for December 7. The meeting was cancelled as a result.