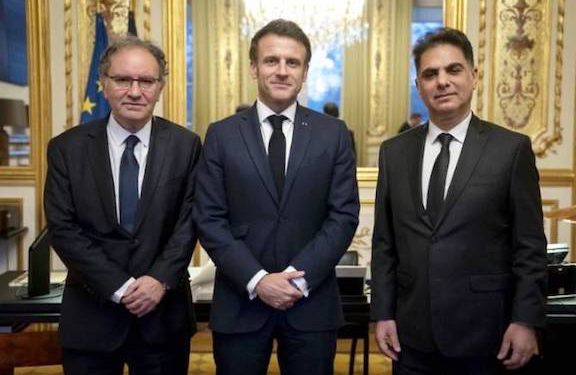 President Emmanuel Macron of France on Tuesday met with the co-chairs of the Coordinating Council Armenian Organizations in France (CCAF), Mourad Papazian and Ara Toranyan, at the Elysee Palace, the organization reported.

Macron and the CCAF leaders discussed the latest situation in Artsakh resulting from the closure of the Lachin Corridor since December 12. Threats to the territorial integrity of Armenia were also discussed.

Toranyan and Papazian welcomed Macron’s interest in the matter and expressed hope that France will further intensify its role in protecting the population of Artsakh.

Papazian, who is also a member of the Armenian Revolutionary Federation Bureau, told Tert.am that the meeting with Macron lasted one hour and a substantive briefing was presented to the president about the dire situation facing the people of Artsakh.

After emphasizing that 120,000 Artsakh Armenians are facing dire humanitarian conditions as a result of Azerbaijan’s blockade of that country, Papazian said concrete suggestions were made to Macron and that the community is awaiting his response.

Papazian also said that the threats to Armenia’s territorial integrity and sovereignty, as well as the dangers of a new war were also discussed with Macron, who reportedly shared the Armenian leaders’ concerns about those matters.

Toranian, the other CCAF co-chair spoke about the meeting with News.am, telling the site that France must become even more active on the ground and must bolster its diplomatic capabilities to assist Armenia and Artsakh.

“We said [to Macron] that the situation is difficult and the world needs to do more. Azerbaijan wants to isolate Armenians from the world, but we ourselves must isolate Azerbaijan and leave it alone in the world. France, together with other countries, can help the Armenians. Paris can find common ground with Americans and even Russians on this matter,” Toranian stressed.

When asked if France is ready to provide military or serious economic support to Armenia in case of need, Toranian said: “Why not.”

“If actions are taken against Armenia, I don’t think that France—and not only France—will sit idly and allow Armenia to be in a difficult situation. Right now all the assistance is going to Ukraine, but the issue of Armenia also has an important place for France,” Toranian said.