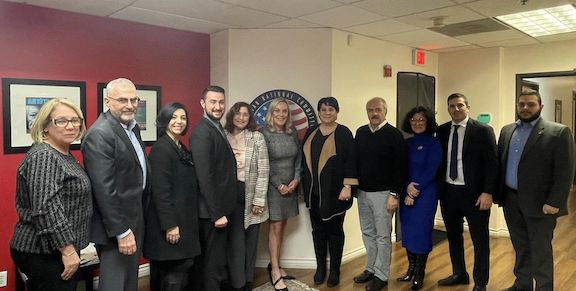 Supervisor Kathryn Barger with representatives of the ANCA-WR

The Friends of the Armenian National Committee of America – Western Region will hold a fundraising event on February 22 at Phoenicia Restaurant in Glendale to support Supervisor Kathryn Barger of Los Angeles County’s fifth district in her 2024 final reelection campaign.

“Supervisor Barger has consistently proven herself to be a reliable and loyal friend to the Armenian-American community, and we are proud to once again support her just as we did in 2016 and again in 2020,” said the Chair of the ANCA-WR Board of Directors Nora Hovsepian, Esq. “The Fifth Supervisorial District of Los Angeles County is home to the largest concentration of Armenians outside of Armenia. The Supervisors’ commitment to her Armenian-American constituents is evident in her unwavering and principled support of the community, its institutions, and the Armenian Cause,” she concluded.

Supervisor Barger, whose Chief Deputy Anna Mouradian is a daughter of our community, was first elected in 2016 to the Los Angeles Board of Supervisors. However, her tenure in public service began in 1988, when she rose through the ranks of then-Supervisor Michael Antonovich’s office to ultimately reach the position of Chief Deputy.

Supervisor Barger’s relationship with the Armenian-American community has been fruitful and aided in developing Armenian-American institutions. The Supervisor secured substantial funding of one million dollars for the Armenian American Museum still under construction in Glendale, California. She has consistently supported the ARS Social Services program after an introductory meeting was organized between her and ARS Regional Executive members and staff, and she has also consistently supported the ANCA-WR Hye Votes program for voter education. In 2017, her vocal stance on honoring the memory of the 1.5 million Armenians lost to the Armenian Genocide led to the establishment of an annual Armenian History Month each April in Los Angeles County. Supervisor Barger and Chief Deputy Mouradian also joined the ANCA-WR-led delegation visit to Armenia in 2019 to strengthen ties between the County of Los Angeles and the Republic of Armenia.

In 2019, for her years of service and commitment to our community, Supervisor Kathryn Barger was honored at the ANCA-WR Annual Awards Gala as Woman of the Year.

Last year, in 2022, Supervisor Barger led the charge to rescind a Scroll of Honor from Los Angeles County to the Azerbaijani Consul General. Subsequently, Supervisor Barger would receive the Foreign Minister of Artsakh, Davit Babayan, during his ANCA-WR-led visit throughout Southern California in late 2022 – where the Supervisor honored the Foreign Minister and reiterated her and Los Angeles County’s continued support to the people of the Republic of Artsakh.