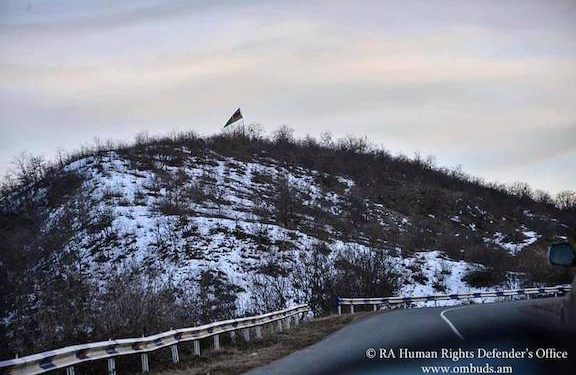 Armenia’s National Security administration deemed another road, where new Azerbaijani customs checkpoints began operating Sunday as “not part of the territory of Armenia,” adding to wide-spread speculation that the Pashinyan administration is ceding territory to Azerbaijan outside of the parameters of negotiations over the so-called “unblocking of communications,” currently underway.

Armenia’s Human Rights Defender Arman Tatoyan called the security council’s statement unconstitutional, saying that it ignores the safety and inviolability of the lives of Armenia citizens in the area.

After setting up customs checkpoints in the main section of the Goris-Kapan highway on Thursday, and blocking Armenians from using the road, Azerbaijan announced that it would set up more checkpoints, this time on the Kapan-Chakaten road, cutting off traffic to Armenians in a significant section of Armenia’s Syunik Province.

In its announcement on Monday, Armenia’s National Security Council continued the government’s cavalier attitude toward the increasing tensions on the road that also is the main highway connecting Iran with Armenia, downplaying its significance, especially the impact that it will have for local residents who regularly use the road for commerce and to travel to their jobs.

Last week, Prime Minister Nikol Pashinyan and Armenia’s National Security chief Armen Grigoryan casually urged residents to use alternative routes, which were recently constructed as a result of the standoff on the Goris-Kapan Highway.

“As for the sections of the Goris-Kapan and Kapan-Chakaten roads, that have come under the control of Azerbaijan, we want to emphasize that they are not in the territory of Armenia according to the Soviet-era documents that direct have legal significance for the borders of Armenia and Azerbaijan,” said the National Security Council in its announcement Monday.

“The government of Armenia has taken measures to create a new network of alternative roads in the Syunik Province, construction of which will be completed soon. We want to note that no settlement of Armenia has been deprived of vital roads,” emphasized the statement.

The declarations about the road were contained in the same National Security Council statement, which addressed the attempted invasion of Armenia by Azerbaijan on Sunday.

Tatoyan took note of the security council’s announcement about Soviet-ear borders and alternate routes and argued that such announcements make it permissible for Azerbaijan to infringe on Armenia’s rights.

“In its statement, the Security Council’s mentions the creation of a network of alternative roads and thus, making it permissible for Azerbaijan to assert its control over roads,” explained Tatoyan.

Arguing that by establishing checkpoints, Azerbaijan is aiming to isolate the local population by depriving them of their right to free movement, and cited specific articles of Armenia’s Constitution to illustrate how the government must, first and foremost, protect the rights of its citizens and guarantee their security.

Tatoyan also said that the construction of alternative roads does not mean that it eliminates the real threats from the current Azerbaijani armed and masked soldiers on Goris-Kapan and Kapan-Chakaten roads to Armenia’s population and especially to the life and safety of residents in neighboring communities.

When Azerbaijan announced its customs checkpoints last week, Pashinyan said that negotiations with Azerbaijan over the checkpoints would mean agreeing to the so-called “Zangezur Corridor,” which Yerevan has said that it opposes. However, Grigoryan, in an interview late last week with Armenia’s National Television channel said that a road connecting to Nakhichevan is under discussion by a task-force dealing with the so-called opening of communications and transport links between Armenia and Azerbaijan.