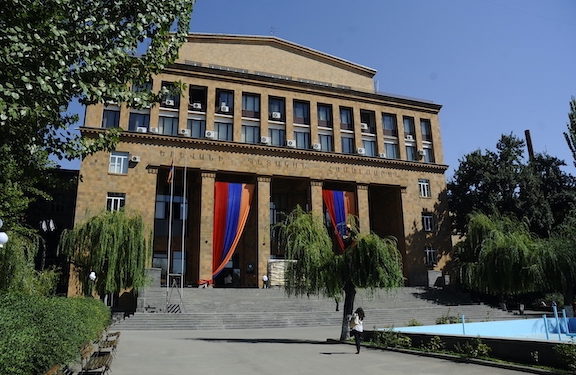 YEREVAN (Azatutyun.am)—The Armenian government is continuing its efforts to gain direct control of three of the country’s leading state universities two weeks after President Armen Sarkissian blocked a relevant bill pushed by it through the parliament.

The bill passed by the National Assembly in late March would empower the government to appoint most members of the boards of trustees that elect university rectors and make other key decisions.

Yerevan State University (YSU) and the National Academy of Sciences strongly opposed these changes, saying that they would violate a clause in the Armenian constitution which entitles state-funded colleges to a high degree of autonomy.

Sarkissian likewise suggested that they are “contentious in terms of constitutionality” when he announced on April 22 his decision not to sign the bill into law. He also asked the Constitutional Court to rule on its conformity with the constitution.

Nevertheless, Prime Minister Nikol Pashinyan’s government pressed ahead with the same changes through an executive order issued earlier this week.

The order stipulates that YSU, the Armenian State Pedagogical University and Gyumri State University will have new governing boards consisting of 20 members. Thirteen of them are to be appointed by the government and the Ministry of Education, while the seven others will be chosen by their faculties and students.

All four parties have been equally represented in the boards until now.

A senior Ministry of Education official defended on Friday the changes sought by the government, saying that they are needed to address a “management vacuum” within the universities. She claimed that their current boards have failed to properly perform their duties.

The official argued that the current YSU board is paralyzed and even unable to formally accept the resignation of the university’s acting rector.

Critics countered that the government itself engineered the paralysis by recalling its appointees from the board earlier this year.

Vahe Hovannisyan, an YSU professor, deplored the “abrupt” decision made by the government after Sarkissian’s appeal to the Constitutional Court. He warned that the three universities will be thrust into deeper turmoil if the court declares the controversial bill unconstitutional.
Hovannisian also said: “Taking the universities under control or changing their boards of trustees does not serve any development purpose.”

“I believe that this initiative by the Ministry of Education, Science, Culture and Sports is disrespectful towards the president of the republic and the Constitutional Court,” he said on Thursday, adding that the problems cited by ministry officials are “artificial.”

“I have grounds to presume that the government caused a problem and is now trying to solve it at the expense of university autonomy,” said Tatoyan. “I believe this is unacceptable.”
Pashinyan and his associates, among them young scholars, pledged to give universities more freedom from the government right after they swept to power three years ago.