Government’s Approach to Peace Treaty with Azerbaijan Comes Under Fire 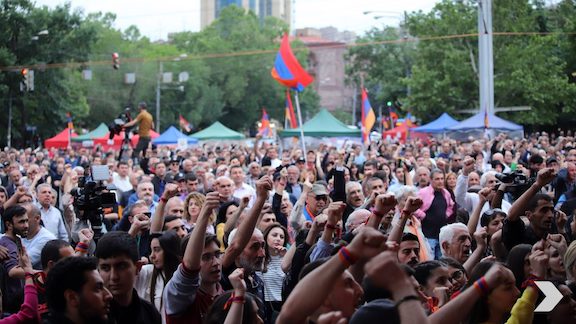 YEREVAN (Azatutyun.am)—Armenia’s political leadership has come under fresh fire after trying to dispel opposition concerns about its position on an Armenian-Azerbaijani peace treaty sought by Azerbaijan.

In March, Baku presented Yerevan with five elements which it wants to be at the heart of the treaty. They include a mutual recognition of each other’s territorial integrity. The Armenian government said they are acceptable to it in principle, setting the stage for official negotiations on the issue.

Armenian official revealed earlier this month that they came up with six other issues that should also be included on the agenda of the talks. They said the proposals relate to the future of status of Karabakh and the security of its ethnic Armenian population.

Edmon Marukyan, a recently appointed ambassador-at-large, shed more light on them in an interview with Armenian Public Television aired on Friday.

In particular, he said, Yerevan made clear to Baku that “the issues of guaranteeing the security of Nagorno-Karabakh’s Armenians, respecting their rights and freedoms and determining the final status of Nagorno-Karabakh are fundamental to the Armenian side.” Marukyan said this disproves opposition allegations that Prime Minister Nikol Pashinyan is ready to accept all Azerbaijani terms of the deal.

Pashinyan triggered anti-government street protests after declaring last month that the international community is pressing Armenia to “lower the bar” on the status issue and signaling his readiness to do that.

Reacting to Marukyan’s remarks, leaders of the country’s two main opposition alliances staging the protests said they are now even more convinced that Pashinyan wants to help Azerbaijan regain full control over Karabakh.

“Can Nikol Pashinyan explicitly state that Artsakh can never be a part of Azerbaijan and that they see no solution along these lines?” one of them, Ishkhan Saghatelyan, told a weekend news conference. “Everything else is manipulation.”

Pashinyan’s stance was also denounced by Levon Zurabyan, a top aide to former President Levon Ter-Petrosian who has long advocated a compromise solution to the Karabakh conflict.

Zurabyan said Pashinyan’s administration did not specify the status of Karabakh and mechanisms for determining it acceptable to the Armenian side. Nor did it make clear that the issue must be on the agenda of peace talks with Baku, he said in a Facebook post.

“It once again became clear to us that today Armenia has a government that does not understand anything about diplomacy and is literally insane,” he wrote.

Azerbaijani Foreign Minister Jeyhun Bayramov said on May 10 that the document presented by Yerevan “can’t be called proposals.” Pashinyan complained afterwards that Baku wants the planned talks on the peace accord to focus only on its own ideas.

Police Stop Opposition Motorcade Rallies
Police detained more than 90 people on Monday to break up fresh motorcade rallies organized by the Armenian opposition as part of its ongoing civil disobedience campaign against the government.

Dozens of vehicles driven by opposition activists were stopped by security forces as they slowly traveled to the center of Yerevan from the city’s outskirts in several simultaneous processions that began early in the morning.

The drivers were forcibly removed from the cars that were subsequently towed away by the police amid traffic jams.

Opposition leaders condemned the police actions, saying that the drivers did not violate traffic rules and simply exercised their legal right to peaceful assembly.

“The policemen that you are seeing are a minority in the [law-enforcement] system, and let this police minority bear in mind that it will be held accountable,” one of them, Aram Vartevanyan, told reporters.
Vartevanyan accused the police of seriously damaging some of the impounded cars.

A police statement released later in the day defended the arrests and the dispersal of the motorcades, saying that they disrupted traffic in the city. It urged opposition supporters not to “restrict other citizens’ freedom of movement by interfering with traffic.”

The police did not halt similar processions organized by the country’s leading opposition forces last week.
They broke up the latest motorcade rallies as the daily anti-government protests entered their third week.

The opposition Hayastan and Pativ Unem alliances pledged to step up the pressure on Prime Minister Nikol Pashinyan as thousands of their supporters again marched through central Yerevan on Sunday.

Pashinyan has rejected opposition demands for his resignation sparked by his recent statements on the Nagorno-Karabakh conflict.