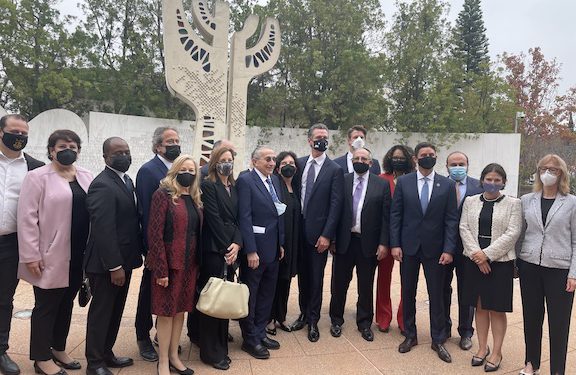 Governor Gavin Newsom is flanked by leaders and advocated who were on hand when he announced the launch of Council on Holocaust and Genocide Education on Oct. 6 (Photo by Ara Khachatourian)

“The very city of Shushi, from where my grandparents were forced to flee because of Ottoman attacks was attacked just last year [by Turkey] in concert with the Republic of Azerbaijan. So, when we say ‘never again,’ we take a hard stop and mean what it means.”

These were the words spoken by Assemblymember Adrin Nazarian on Wednesday during an event at the Museum of Tolerance in Los Angeles, where Governor Gavin Newsom announced the launch of the Governor’s Council on Holocaust and Genocide Education.

By referencing Azerbaijan’s aggressive attack—aided by Turkey—on Artsakh last year, Nazarian illustrated the importance of education in abetting the end to the cycle of violence, which has gripped the world, as well as emphasizing that unchecked acts of genocide historically have been repeated.

The newly created Council will be tasked with identifying instructional resources and will teach students about the lessons of genocide, and will support students, teachers and families when acts of anti-Semitism or bigotry occur on school campuses.

“We find ourselves in a moment of history where hate pervades the public discourse,” said Newsom. “National surveys have indicated a shocking decline in awareness among young people about the Holocaust and other acts of genocide. But in California, we are offering an antidote to the cynicism that this is how things are, and responding to that hate the best way we know how – with education and empathy.”

The creation of the council stemmed from an initiative by State Senator Henry Stern, who marshaled a bill through the California legislature addressing the need for education on the matter. The Armenian National Committee of America-Western Region worked closely with Stern and other lawmakers on the passage of the measure.

“The ANCA-WR has worked tirelessly to ensure that the Armenian Genocide is properly taught in public schools, and we have closely collaborated with Senator Henry Stern and his colleagues to find ways to accomplish this goal. As the congressional resolutions specifically stated, it is US policy to encourage public instruction on this issue,” said ANCA-WR Board chair Nora Hovsepian, Esq.

“Governor Gavin Newsom has put words into action and we look forward to playing an integral role on his Council to bring Armenian Genocide curricula to California students. We are grateful to Governor Newsom, Senator Stern and all those who are committed to the principle that such painful lessons of history must never be forgotten,” added Hovsepian.

In his remarks on Wednesday, Stern made a poignant observation, saying that his daughter might not have been born, if his grandparents did not survive the Holocaust, adding that while he and many others grew up with stories of survival, many people lack the first-hand stories that inform them about the horrors of genocide.

“I applaud Senator Stern for his leadership to create this important educational opportunity,” said State Superintendent of Public Instruction Tony Thurmond.  “Education has the power to be a great equalizer and to help us grow, understand, and find a pathway to healing. It is the way to build inclusive and welcoming school environments. This is why, at the California Department of Education, I have created the Education to End Hate Initiative and why I am so proud to co-sponsor Senator Stern’s bill; now we look forward to partnering in the implementation of the $10 million that has been allocated for the Anti Bias Education Grant program in the state budget.”

In his remarks, Thurmond also thanked the ANCA-WR for its efforts to advance genocide education in the state. The ANCA-WR has worked closely with Thurmond who, along with the California Board of Education, has categorized Armenian Genocide education as both a critical and necessary part of the history curriculum. The California State Social Studies Framework will be the key to making certain that the Armenian Genocide is taught.

Newsom has long made the eradication of discrimination and hate a priority, governor’s office said. Newsom has also allocated $110 million for a multi-year grant program, of which $10 million will fund the Anti-Bias Education Grant Program to prevent and address racism and bias in all California public schools and promote inclusivity; and $5 million will support a peer social media network project for children and youth, with an emphasis on K-12 students who have experienced bullying, or who are at risk of bullying based on race, ethnicity, language, or country of origin, or perception of such

The Council will be responsible for developing a volunteer speaker’s bureau of individuals that can engage teachers and students in conversation about the lessons of genocide, providing best practices and resources to support schools throughout the state that are dealing with acts of bigotry or discrimination, and hosting educational events and seminars for educators, students and other interested parties, Newsom’s office said.

Stern and Thurmond will be joined by Attorney General Rob Bonta as Co-Chairs of the Council. Also serving on the Council as members are Nazarian, Assemblymembers Jose Medina, James Ramos and Rebecca Bauer-Kahan, and Senators Scott Wiener, Connie Leyva, and Susan Rubio. Based on community feedback, the Council will also include academics, advocates and community organizations reflecting the wide diversity of communities impacted by genocide throughout history, according to the governor’s office.