Groundbreaking Musical About Armenian Genocide to be Staged in Glendale 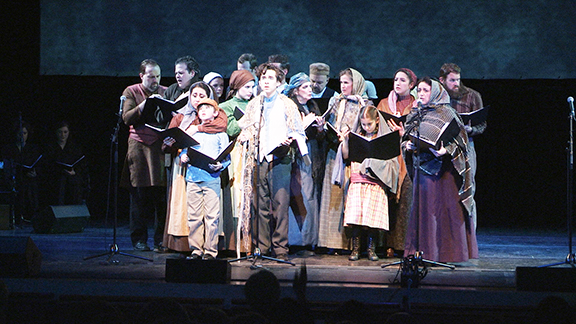 A scene from the Armenian Genocide-themed musical “I Am Alive”
Denver-based Emmy Award winning composer Denise Gentilini and writing partner, internationally celebrated singer/songwriter Lisa Nemzo, bring their original production, I AM ALIVE to Los Angeles for an exclusive showing for one weekend only this September.
Gentilini, who is of Armenian descent, has assembled a largely non-Armenian cast to tell the story of the Armenian Genocide with a completely new focus; celebrating those who survived. Gentilini was inspired by the story of her own grandparents who survived the systematic killing of 1.5 million Armenians by the Ottoman Empire in 1915.
Using her childhood memories of her grandparents as well as transcripts from interviews with them, Gentilini/Nemzo used direct excerpts from their firsthand accounts for some lyrics and dialogue in the musical. This personal connection has allowed them to craft a complex experience that explores the human side of a politically contentious topic alongside the love story that unfolds between two people in an unimaginable set of circumstances.
With the 100 year anniversary behind us, this production is meant to provide closure around the tragedy and provide a renewed focus on the human spirit.
I AM ALIVE is produced by Well Orchestrated Madness and directed by Christy Montour-Larson and will be shown only one weekend on the West Coast. Partner organizations include; Jewish World Watch, Mashdots College, United Armenian Council, ANCA-WR and AFFMA. Armenians of Colorado serve as the fiscal sponsor.


Denise Gentilini (Book, Music, Lyrics, Orchestrator, Producer and Music Director)
Specializing in film music, Denise is an Emmy® award winning composer with 30-years experience in music composition and production. After 20 years of performing and doing session work in her native Los Angeles, Denise moved to Colorado to continue her music career. Using her music as a tool for awareness, Denise has written songs for The Children’s Hospital, Colorado NSC Autism Department, (I Chose You), The Iliff School of Theology – Courage Award honoring Judy Shepard (Courage Said I Can, co-written with Mindy Sterling). With her partner, Lynette Prisner, their production company, Well-Orchestrated Madness produced the 2009 concert, We Are Voices – For A Future Without Genocide, using her original music to bring awareness to a subject close to her heart, genocide. Denise is the granddaughter of Armenian Genocide survivors, Kourken and Malvine Handjian, whose lives the musical, I AM ALIVE, is inspired by. Denise’s first Emmy® was received for her film score in her 2002 documentary about her grandparents, The Handjian Story: A Road Less Traveled. Incidentally, the Handjians were pillars of the community in Los Angeles and were members of Holy Martyrs church in Encino. Denise received her second Emmy® award for her film score in the documentary film, Conviction, telling the story of three Dominican nuns who devote their lives to peace. Denise has been writing with Lisa Nemzo for over two decades. I AM ALIVE is their first musical and they are very excited to bring this important history to the stage under the experienced direction of Christy Montour-Larson along with a cast of 21 talented actors from Denver, Colorado.

Lisa Nemzo (Book, Music and Lyrics)
Internationally-renowned recording artist/producer, Lisa Nemzo, is known for her show-stopping, over-the-neck harmonic 12-string guitar solos, as well as her 8-released CD’s (3 on Metronome/Polygram Records). Nemzo is also a record producer and Emmy® nominated songwriter with a catalog of charted-songs including songs for Tanya Tucker, Here’s To Love. Nemzo charted in the top ten with Walking On Ice and Hot Summer Nights. She toured with Bonnie Raitt, Heart, Ray Charles, Joe Cocker, Christopher Cross and Hall & Oates. For her co-op record label, Dream Wild Records, Nemzo has produced critically-acclaimed: Marc Platt’s Bitter and Sweet EP, Blue Collar, Roots Music Report Chart-Topper Carey Appel’s House of Cards; Oakland’s female rockabilly band Bad Ass Boots, Gotta Give Me Something and Vietnam Veteran, blues-rock guitarist Michael Hughes CD, Trying to Come Back Home. Songs and Videos: Lisa’s title track on her CD Restless Soul was entered into the Smithsonian Institute representing the best of folk music from the 1990’s. Lead single and video, Reach, won Best Environmental Music Video of 2009, from Green Screen Environmental Film Festival & Salon. Lisa’s tribute to US military men and women in the music video, Arlington, was called “An anthem for our generation” by the Washington Post and won best Merit Award 2012 for Best Music Video/Accolade Film Festival, La Jolla, CA. Theme song Breaking Through, written with Denise Gentilini for the documentary film of the same name.
I AM ALIVE is Nemzo and Gentilini’s first musical in the 20+ years of writing together. “Having met Denise’s grandparents, Kourken and Malvine, made this experience personal and profoundly important”, Nemzo shared in a recent interview.
Christy Montour-Larson (Director)
Christy Montour-Larson has directed over 75 productions from Shakespeare to Pinter to musicals to the newest works in America. She is a multiple Denver Post Ovation and Colorado Theatre Guild Henry award-winning director, recently named top director by Westword, 5280 Magazine and CBS4 Denver. A member of the Artistic Company at Curious Theatre, her recent directing credits include Sex With Strangers, Charles Ives Take Me Home, Good People, Time Stands Still and Red. Christy’s work has also been seen in Colorado at the Denver Center for the Performing Arts (Shadowlands, The Giver, Well) the Arvada Center (Cabaret, All Shook Up), Creede Repertory (August: Osage County, The Last Romance), Town Hall Arts Center, Phamaly, Boulder Ensemble Theatre Company and Theatreworks. Nationally, Christy has directed at New American Theatre, Rochester Civic Theatre, the Duluth Playhouse, Dark Horse Theatre and for Seven Devils Playwright Conference, where she sits on the Board of Directors. Christy earned her BFA in Theatre from University of Minnesota, Duluth, where she was awarded the Promethean Award for outstanding alumni and her MFA in Directing from Mason Gross School of the Arts at Rutgers University.
I am Alive will have its opening night showing on Saturday September 10 at 7:30 p.m. with a matinee showing on Sunday Matinee: Sunday September 11 at 3 p.m. at Alex Theatre, 2165 North Brand Blvd, Glendale. Tickets are available at alextheater.org.