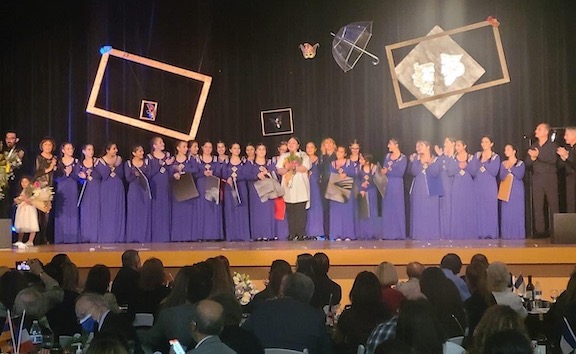 The Hamazkayin Theater Company returned to the stage after a two-year ban on performances imposed by the Covid-19 pandemic, with a musical-theatrical performance dedicated to world-famous French-Armenian composer, singer, actor, and humanitarian Charles Aznavour. The event took place on Saturday, October 30, at Ferrahian High School’s Avedissian Hall.

The atmosphere during the open-air reception prior to the performance was energetics and joyful, with champagne and music—Aznavour’s most noteworthy songs—playing in the background. Attendees had the opportunity to take photographs in front of a large poster of a famous photograph Aznavour, made especially for the occasion. Additionally, to ensure the safety of all those present, COVID mandates were followed, with a temperature check and vaccine verification required to enter the hall.

Inside the venue were commemorative cups with a picture of Aznavour on the tables, CDs published by Hamazkayin, and enlarged portraits of Aznavour, including unique archival photos. The tables were decorated with small French and Armenian flags, and beautifully arranged appetizers. The menu was also French, to commemorate Aznavour’s second homeland.

The hall was at full capacity, with over 300 guests in attendance. In the last few days before the event, the tickets were already sold out. There was a palpable sense of longing from the public, who had missed coming together to enjoy arts and cultural events in the community, an opportunity Hamazkayin was able to provide. In attendance were Manoug Choukhadjian, a member of the Central Committee of Hamazkayin, Chairperson of the Regional Board Knar Kortoshian, and several other members, representatives of sister organizations, and distinguished guests.

The host of the program was Chairman of Hamazkayin Theater Company Ara Yacoubian, who welcomed the audience. In his remarks he spoke about Aznavour’s influence on Armenian culture. He had also prepared videos and pictures, which were displayed on screens along with his explanations and comments. All this conveyed interesting and new information to the audience about the singer.

The program was prepared with great care, despite of the fact that the rehearsals were conducted under difficult circumstances, with zoom meetings or in open air facilities. The appreciation and the satisfaction of the audience was evident by their cheers and long applauses throughout the evening.

The Hamazkayin Music Committee’s newly formed Nayirian Choir, led by Lusine Meliksetyan and accompanied by pianist Sofi Sarkisian, beautifully sang Sayat Nova’s song “Kani Vur Jan Im.” This song was especially chosen, because Sayat Nova was one of Aznavour’s favorite composers and had an outsized influence on Aznavour’s own compositions.

After the choir performed, Missak Artinian took the stage to play Aznavour’s songs on saxophone.

The director had given a unique interpretation to each song and to link one, in its abstract, to Mother Armenia. The actors, despite the fact they had to perform without dialogue, were able to express plausible feelings with their movements and facial expressions that were deeply expressive and moving, and matched the personalities of each character they portrayed, respectively.

The program concluded with Aznavour’s “Pour Toi Arménie,” performed by Hamazkayin’s Nayirian Choir, with a projection of Aznavour’s portrait and the Armenian flag.

The Hamazkayin Theater Company of the Hamazkayin Regional Committee, with all its members, theater troupe, artists, donors, and supporters, organized an exceptionally enjoyable and meaningful event, dedicating a special evening to pay homage to the legacy and impact of the great Armenian musician/compositor, Charles Aznavour.

The Hamazkayin Theatre Company looks forward to its upcoming roster of programs, which will be announced in due time.

Those wishing to participate as an actor or to volunteer may write to: shoarslan@aol.com or aravahak@gmail.com.