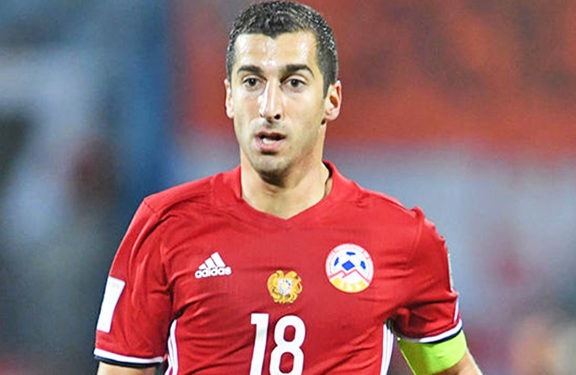 Henrikh Mkhitaryan during a match in 2017

Henrikh Mkhitaryan, the Captain of the Armenia’s National Soccer Team announced on Thursday that he will be retiring from National Team.

“I remember when I first put on my National Team jersey, this was in a friendly against Panama, and my first goal for my nation, in a World Cup qualifier against Estonia. I wanted to win every step of my career, no matter how difficult that would be,” said Mkhitaryan in a social media post.

“It was an honor to play for my nation for the past 15 years and even more so of an honor to captain it for the last 6 years,” added Mkhitaryan. “After 95 international caps, hard work, passion and unprecedented ups and downs along the journey representing my country on the field, I have taken the decision to retire from my international career with the Armenian National Team.”

“I came to this decision after my last game against Germany in November. I think it is the right time. I’ve given everything I can possibly give to my National Team,” explained Mkhitaryan.

“For the coming years I will therefore be fully focused on my club career,” said Mkhitaryan.

“My soccer nest was woven in Armenia, my homeland, and I will forever be grateful to every single person who supported me, who coached me, who I played with and who contributed to my growth as a footballer and as a person,” the soccer star added.