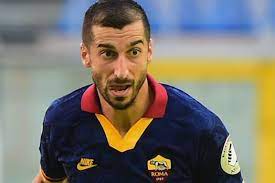 Captain of Armenia’s National Soccer team and midfielder for Roma has signed an extension to his contract that will see him play for the Italian team for an additional season, through 2021.

It was reported earlier that Mkhitaryan, who is on loan to Roma from Arsenal, would complete the 2019-2020 season with Roma. With this new agreement, he will play another year with the distinguished Italian team.

After putting the finishing touches on the deal Mkhitaryan spoke to Roma’s official website  to share his thoughts on staying in the Italian capital, and his ambitions for the next 12 months.

So, Henrikh, just how pleased are you to sort this out and to extend your stay here at Roma?

I’m very happy. Finally, we could reach an agreement to extend the loan, with a provisional agreement for next season too, so I’m very pleased. I’m happy to stay here because I still have things that I haven’t achieved yet that I want to achieve.

How do you reflect on your time here so far, since your arrival last summer?

I came here with a very good, positive feeling. Then I started to play, and I scored and assisted others to score too… but then I got a couple of injuries that weren’t part of the plan.

At the start of this year I was back, though, and I was starting to get in the best shape… and then the virus came on. I think that was the worst time in our entire football life – but now we’re pleased to be back and to restart the season.

Of course it’s not the best start but we don’t give up – we’re going to push and go forward because the season is not finished. We still have 10 games to play, so we’re going to try to do everything possible to earn as many points as we can.

What is your personal target for the rest of the current campaign?

Clearly I want to start lots of games – but of course I will be ready, whatever the coach decides.

I think we’re a very competitive team because we have more than 25 players, so in a few positions we have not two but three players – which is hard but it’s good too, because we’re always keeping our teammates focused and not letting them relax.

It’s one thing, one goal we are fighting for – which is we want Roma to be a top club with wins and trophies. And even if it’s difficult; if one game I have to play and then the other game someone else plays, at the end of the day we’re fighting for one thing, and that’s Roma.

Two games have been played now since the lockdown – what’s your assessment so far?

Well, we started with a positive note winning against Sampdoria – which was not an easy game, obviously, because we conceded an early goal. It was hard to come back from that but we did, thanks to my teammates and especially thanks to Edin [Dzeko], who scored two incredible goals.

The game against AC Milan; I can say that in the first half we played better than them, we played well – but then in the second half I’m not sure what happened. They started to dominate the game and we struggled a bit. But we have to learn from that, we cannot give up.

“It’s always easy to give up – but we just have to learn, to identify our mistakes and to learn from them and make sure we don’t repeat them again.

Does that make the Udinese game on Thursday even more important, to bounce back?

Well, sure. But even if we would have won against Milan, you know, the main target would be the same – to win the next game against Udinese and then the ones after that. So now we have to be even more motivated to play against Udinese.

We are playing at home without supporters, which is neither good nor nice, but at the end of the day it doesn’t matter how we play or where we play, we have to win that game.

What has it been like for you, playing behind closed doors? Is it something you have experienced before?

Maybe in a few friendly games, I guess! I mean, it’s not nice to play in empty stadiums. Not in the San Siro, not in the Olimpico, because at the end of the day you want to feel the support of your fans, you want to see them, celebrating the wins, celebrating the goals and see their happy faces.

So it’s a shame to see this situation, but of course we know the reason and everyone is fighting to solve this problem and make sure that fans can come back to the stadium as soon as possible, and as soon as it is safe.

So when that happens I will be more than happy to see Roma fans at the stadium, because we really miss them. Since the very first game, I have been very impressed by the way they support the team and the players. Of course, we have had bad games too, but they were there for us even so.

So I’m looking forward to start playing in full stadiums and hopefully we can we can have that some time soon.

What about the various new health protocols and practices in place now. As a player, do you feel safe?

On their part, the club has done everything to keep us safe and I’m thankful to them for that. Of course it’s something new for me, for my teammates, for the club, to be tested every week before the games, and then to travel to Milan in the way we did, after it experienced the pandemic quite heavily. So it was something a bit new as an experience over the past few days and weeks.

I hope it will never repeat, this situation, but it’s a thing that we have to take the positive energy from it and move forward.

Now there are these 10 remaining games in Serie A, but after that there is the Europa League too. How exciting is that prospect – a competition you know very well?

Well, first of all, we have to be focused on the upcoming 10 games in Serie A. And then we’re going to have time to think about Europe, because there is still over a month before that starts. So everything is possible before that. We want to be focused first on Serie A.

Even the Europa League games will be played in Germany, without our supporters, over just one leg – so it will not be straighforward. It’s something new for everyone. But you know, I think they took the decision for everyone that it will be safe.

So we have to keep our heads up and be positive and confident that we can reach the final or win it. All the teams left in the competition are very strong, so we are ready to face anyone and give our very best to win.”