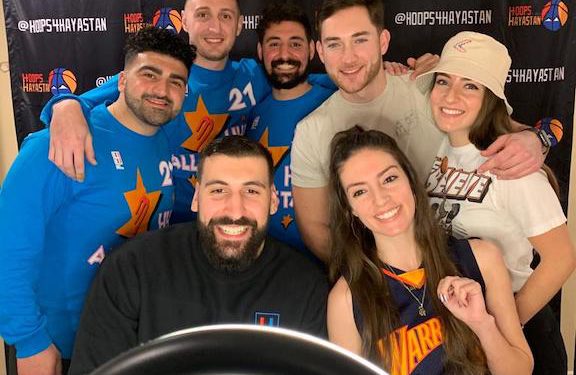 Hoops 4 Hayastan, a sports-focused non-profit organization founded in 2017 by two Armenian-American members of that year’s Armenian National Basketball team, just wrapped up its biggest fundraiser, successfully raising about $50,000 last weekend. The initial goal of raising a total of $10,00 t0 12,000 during the three-day event was surpassed the very first night.

Fundraising events don’t get any more exciting for today’s youth than the one organized by the seven-member team of Hoops 4 Hayastan (H4H). Targeted ideally for its sports minded followers, H4H hosted brief interesting interviews with an amazing group of movers and shakers in the sports world. Guests included well known current professional athletes, well-respected sports veterans, business professionals in the sports field, coaches, and sports enthusiasts. The fundraiser was hosted via Instagram Live over three evenings last weekend. The informal and relaxed vibe created by the H4H hosts with their guests kept the atmosphere fun, upbeat and friendly.

More than twenty-five interesting guests shared their inspiring stories, career highlights/challenges, and advice for today’s youth who are interested in sports. Many of them expressed heartfelt messages for the youth to pursue their dreams with hard work and determination, while remembering to care about the world around them and giving back to their communities. Hundreds of viewers from all over the country and some from as far away as Brazil watched the exciting live program and many of them participated by offering live comments and questions for the guests and the hosts.

The two co-founders of Hoops 4 Hayastan, Garen Spendjian from New York and Matt Madoian from Rhode Island, described to the guests and viewers, how after their first visit to play in a basketball tournament in Armenia, they both realized that as in most developing countries, soccer was the main team sport in Armenia (especially in villages), and that most other sports were individual ones. Contrary to soccer which in its most basic form requires an open field and a ball, basketball requires a proper outdoor or indoor court, hoops, basketballs, etc. As big lovers of basketball, they decided to find a way to bring the love of the game to the villages of Armenia.

During the next two years, they expanded the H4H team to five members who all loved the game and the mission of H4H. Joining the team were Aram Spendjian from New York, Vigen Sarkisov from Boston, and Arakel Aristakessian from the San Francisco Bay Area. This ‘starting five’ organized a few small fundraisers, collected gently used athletic shoes from their local Armenian communities and after their summer tournaments in Armenia, visited a few schools in villages and distributed shoes and uniforms to the local children.

These experiences of interacting with the children and seeing the happiness in their young excited faces, were life changing for the H4H team. They realized then and there that this was going to be their mission as Armenian Americans and lovers of basketball. They decided to double their efforts, add a few more basketball enthusiasts to the team and focus on larger fundraising efforts so they could take on bigger projects in the villages, such as renovating or building gyms and possibly finding sponsors to bring basketball shoes, uniforms, gear, etc. to the villages of Armenia.

In 2020, two more members joined the team from the San Francisco Bay Area. Sisters Natalie and Claudia Leist, also lovers of basketball and whose careers are in the sports field, became the newest members to join the team of five guys. Although due to COVID, the team didn’t travel to Armenia, they made the most of their time while working from home and met regularly via Zoom calls to discuss future projects and potential fundraising events.

In 2020, fundraising events via Instagram Live had become very popular. The H4H team began discussing the possibility of planning such a fundraising event for their future projects as well. Having team members who have made connections with professional athletes and coaches during their basketball careers or through their current jobs in the sports field, they brainstormed potential guests for such an event. Before too long, an impressive list of guests emerged and an exciting IG Live fundraiser was planned for January 2021.

Many professionals in the sports field also joined, including, Allie Clifton, Christian Endrigian, Ariana Andonian, Careen Chapjian, Blaise Ffrench, and basketball enthusiast and Michigan State Representative, Mari Manoogian. Not only were they all gracious guests and warmly engaged with the hosts and viewers, but many of them generously donated to the H4H cause and urged everyone watching to do the same.

This Hoops 4 Hayastan All-Star Weekend truly lived up to its name and was incredibly successful in every way. It not only surpassed all fundraising expectations of the H4H team members, but provided an amazing opportunity for all the viewers to relax safely at home, tune in to Instagram, enjoy hearing inspiring stories from many role models for those who are lovers of sports, and to donate to an amazing cause that will bring the joy of the sport of basketball to underserved kids in the villages of Armenia.

The H4H team deserves much appreciation and gratitude for their weeks of planning, excellent preparation of material and questions for the guests, and for their heartwarming dedication to bring the love of sports to our youth in Armenia.

Hoops 4 Hayastan is a 501(c)(3) non-profit organization. Please visit their website and social media pages to learn more about them, to contact them and to support their great efforts.

How AYF Has Shaped Activism

Aliyev Says ‘No One or Nothing Can Stop’ His Forces