Russian Troops to be Deployed in Gegharkunik 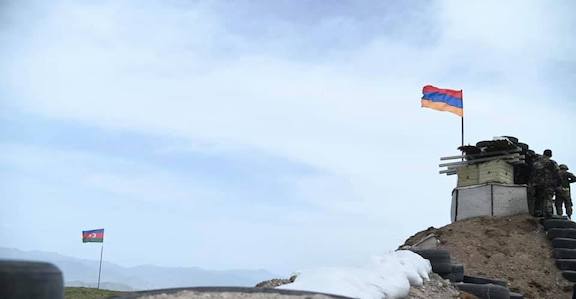 YEREVAN (Azatutyun.am)—Russia has begun preparations for deploying its troops in another Armenian province bordering Azerbaijan, a senior Armenian official said on Wednesday.

“Some of them are already in the [Gegharkunik] province. They will be deployed along the border some time later,” the provincial governor, Gnel Sanosyan, told reporters.

The deployment will start in the coming days, Sanosyan said.

Gegharkunik borders the Kelbajar district west of Nagorno-Karabakh which was retaken by Azerbaijan following the autumn war.

Azerbaijani troops crossed several sections of the Armenian-Azerbaijani border and advanced a few kilometers into Gegharkunik and another province, Syunik, on May 12-14, triggering a military standoff with Armenian forces. Yerevan has repeatedly demanded their withdrawal.

According to Sanosyan, the deployment will be followed by the withdrawal of both Armenian and Azerbaijani troops from contested border sections and the start of Russian-mediated talks on the demarcation of the long frontier.

Russia already dispatched soldiers and border guards to other parts of Syunik following the Armenian-Azerbaijani war stopped by a Russian-brokered ceasefire in November.

The Russian ambassador in Yerevan, Sergei Kopyrkin, confirmed on Wednesday that Moscow and Yerevan are discussing practical modalities of further Russian troop deployments in Armenia.

“As you know, Russian border guard posts have been deployed at various sections of the Armenian-Azerbaijani border,” he said. “They are helping to keep the situation on the border calm and stable so that the local population feels safer and more comfortable in these unusual circumstances.”

“Discussions are underway about how such presence can be expanded,” Kopyrkin told journalists after inaugurating a Russian cultural center in the Armenian town of Armavir.

The issue was expected to be on the agenda of Russian President Vladimir Putin’s talks with Armenia’s visiting Prime Minister Nikol Pashinyan scheduled for Wednesday evening.