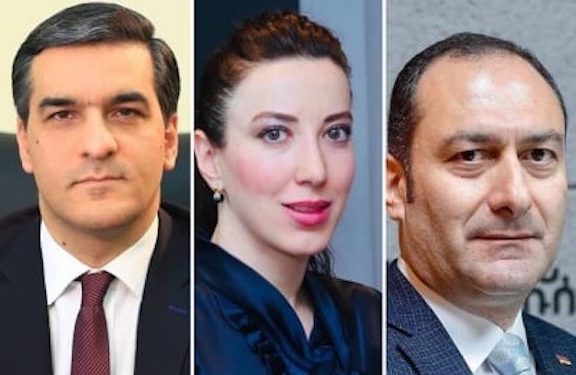 After a video surfaced in which Parliament Speaker Alen Simonyan is heard making untrue statements regarding Armenian prisoners of war, Armenia’s Human Rights Defender Arman Tatoyan and attorney representing Armenia at the European Court of Human Rights Siranush Sahakyan and Artak Zeynalyan issued a joint announcement warning Simonyan and other high-ranking officials to not invoke sensitive information about captives to further their personal agendas.

Simonyan came under fire and faced calls for his resignation on Tuesday after the video emerged where the Parliament Speaker can be seen and heard saying that many Armenian POWs captured during Azerbaijan’s attempt to invade Armenia on November 16 “put down their weapons and ran away” during fighting with Azerbaijani forces.

He also claimed that their relatives had not protested because they realize that the soldiers were deserters. Hundreds of relatives of captured Armenian soldiers staged a demonstration on Wednesday in front of the parliament calling for Simonyan’s resignation for the comments, which the speaker claims were edited out of context.

“If I’m going to lose Syunik, Sisian because of those POWs … sorry, I may be wrong, but I believe those POWs don’t exist anymore,” Simonyan was recorded as saying.

The human rights advocates’ statement on Wednesday focused on the same conversation, which was was secretly filmed as Simonayn spoke with several members of France’s Armenian community during a recent visit to Paris. Tatoyan, Sahakyan and Zeynalyan voiced concern that Simonyan had cited untrue examples attributed to a repot they issued in August detailing torture and inhumane treatment of Armenian POWs by their Azerbaijani captives.

For example, Simonyan is heard saying that the report documented that POWs were raped in captivity, while the report, entitled “Azerbaijan’s Responsibility for Torturing Armenian Prisoners and Subjecting them to Inhumane Treatment,” did not contain any such data or even the word “rape.” The human rights leaders also contend that the report did not contain any personal data, among them photos or videos of individual POWs, as claimed by Simonyan.

“The Joint Special Public Report highlights the patterns and general forms of torture that, as a rule, have typically been used against Armenian captives in the Republic of Azerbaijan,” the three human rights advocates said in their announcement on Wednesday. “At the same time, the Joint Special Public Report states that the forms and means of violence against captives were different in each case.”

The join statement emphasized that all reports were published based on internationally accepted norms for investigations and data gathering processes.

“We strongly urge high-ranking officials to refrain from publicly speaking on such sensitive issues, and to not exploit them for political or other purposes, as such steps are successfully used by Azerbaijan before international organizations—including judicial bodies—as their defense and for their own benefit, and to the detriment of the rights of the Armenian captives,” warned Tatoyan, Sahakyan and Zeynalyan.

The three stressed that such statements by high-ranking officials create obstacles for them to advance their mission of advocating for human rights.