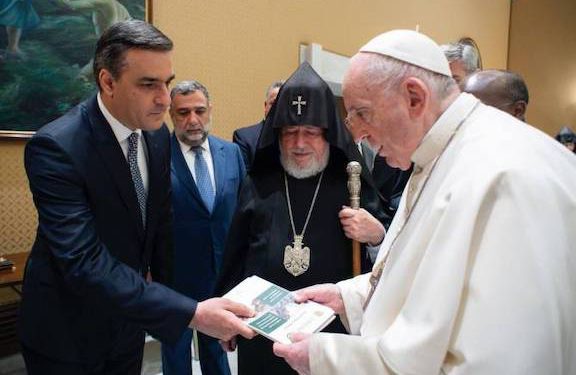 Armenia’s Human Rights Defender Arman Tatoyan presented Pope Francis a report on the torture of Armenian prisoners of war and captives by Azerbaijanis.

Tatoyan is in the Vatican as part of delegation led by Catholicos Karekin II, who introduced the Human Rights Defender to the Pope. Tatoyan told the pontiff that some of the Armenian captives are held illegally in Azerbaijan facing a threat to their lives, and spoke about Azerbaijani violations against the border population of Armenia.

Tatoyan presented his report to the pope, who, according to the Human Rights Defender’s Office, leafed through the report and saw the photos depicting Azerbaijan’s heinous and cruel treatment of Armenians.

“Pope Francis instructed his assistants to examine the reports and present it to him,’’ the Human Rights Defender’s Office said, adding that three reports were handed to the Pope, one of which about the so-called “tropy park.” The second reports covers torture of Armenian captives by Azerbaijanis and the third is about the ban of using the testimonies of captives during trials on criminal cases. The latter report alleges that the Azerbaijani authorities initiated illegal criminal proceedings against Armenian captives on the basis of their testimony, which they received through torture and inhumane treatment.

Tatoyan also presented his findings on Wednesday to the Human Rights Protection Committee of the Italian Parliament.

In his presentation to Italian lawmakers, Tatoyan emphasized the need for the immediate return of all Armenian captives, explaining that Azerbaijan is neglecting its international obligations and using the POWs as military-political bargaining chip.

The Human Rights Defender referred to the illegal deployment of Azerbaijani forces on the roads between the communities of Armenia after the war, which endangers people’s lives and well-being, while as a result of their incursion into Armenia’s sovereign territory in Syunik and Gegharkunik provinces many other criminal acts, including shootings, threatening civilians, theft of livestock of the bordering residents have taken place.

“Violations of rights, including torture and inhumane treatment, are based on the Azerbaijani authorities’ policy of xenophobia and hostility, which continues with the manifestations of fascism,” Tatoyan told Italian lawmakers.

Iran’s Transport Links With Armenia to Be Restored