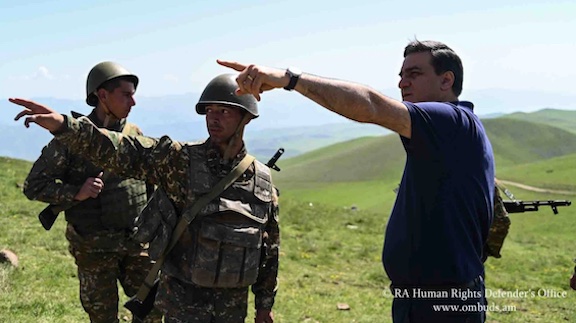 Tatoyan described as “extremely concerning” the fact that Pashinyan repeatedly brandished a hammer during his campaign rallies held in recent days. He also deplored Pashinyan’s threats to “throw on the ground” and “bang against the wall” opposition supporters who would try to illegally influence the outcome of Sunday’s general elections.

“The use of phrases such as ‘make them lie on asphalt’ and ‘bang against the wall,’ which are addressed to a circle of unknown individuals and are extremely dangerous in terms of human rights, must be stopped,” the ombudsman said in a statement. “This unacceptable rhetoric is associated with mass violations of human rights.”

The hammer demonstrated by Pashinyan on the campaign trail is meant to symbolize a popular “steel mandate” which he says he needs to continue ruling Armenia with a more firm hand.

“With the steel mandate we will take out all rusty nails, including in here Ararat [province,]” the premier told on Monday supporters rallying in Masis, a small town just south of Yerevan.

Pashinyan doubled down on his rhetoric on Tuesday as he held campaign rallies in southeastern Syunik province where most town and village mayors have been openly defying him since Armenia’s defeat in last year’s war in Nagorno-Karabakh. He described them as “rusty nails” that will be taken out by his hammer after the elections.

“With this mandate we will break their [bank] accounts, destroy their firms and shove each of these criminal upstarts into holes on your behalf,” he said, brandishing the hammer.

In Tatoyan’s words, Pashinyan’s recourse to this analogy has triggered “dangerous discussions” on social media, with hardcore supporters and opponents of the current Armenian government openly threatening violent reprisals.

“Politicians regarded as candidates for the post of Armenia’s prime minister must be especially careful about words used by them and take into account all their figurative meanings,” the ombudsman stressed.

Former President Robert Kocharian and his political allies leading the opposition Hayastan Alliance commented scathingly on Pashinyan’s hammer when they campaigned in Masis on Tuesday.

“We are coming not to smash the hammer on their heads but to make the country prosperous,” Kocharian said at an indoor meeting held there.

Ishkhan Saghatelyan, sounded less conciliatory. “On June 20 we will wrest the hammer from his hands and you know what we will do,” he told local Hayastan Alliance supporters.

Tatoyan already denounced Pashinyan and his rivals last week for resorting to inflammatory campaign rhetoric. He singled out the prime minister’s pledges to “purge” the state bureaucracy and wage “political vendettas” against local government officials supporting the Armenian opposition