‘I will always Stand with Armenia, Artsakh, and Armenian Community,’ Says Schiff in his Genocide Anniversary Message 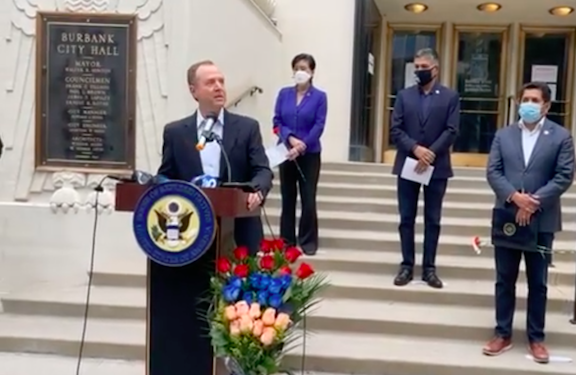 Congressman Adam Schiff on April 24 issued the following statement on the 107th anniversary of the start of the Armenian Genocide:

One hundred and seven years ago, the Ottoman Empire undertook a systematic effort to destroy the Armenian people – ultimately murdering one and a half million innocent men, women, and children in what became the first genocide of the 20th century.

Despite the overwhelming evidence of this methodical mass killing, to this day, Turkey continues to deny the genocide ever happened. But today, we speak with one voice:

We will not forget. We will never forget.

For tens of thousands of my constituents, achieving recognition of the genocide has been a lifelong struggle. The milestones we have achieved together, from the resolutions passed by Congress in 2019 affirming the facts of the genocide to President Biden’s historic recognition last year, happened because of them – a strong and resilient Armenian diaspora.

But the threat of annihilation still hangs over the Armenian people. Because today, the Armenian people are still under attack, including the many who died in Artsakh, the thousands who were forced to flee unprovoked aggression by Azerbaijan and Turkey, and those who remain prisoners of war or live in fear of another invasion.

We cannot allow these crimes against humanity to go unrecognized. The United States must fully step into its role as a defender of democracy and peace around the world.

We must not relent in our calls for the immediate, safe, and unconditional release of the remaining Armenian prisoners of war and captured civilians, for the end of U.S. assistance to the Aliyev regime, and for stronger efforts to secure more funding for Armenia and Artsakh.

Now more than ever, we must seek to further strengthen and support Armenia and Artsakh. We demand their liberation – and we will not rest until safety, peace, and justice are achieved for our Armenian brothers and sisters abroad.

I will always stand with Armenia, Artsakh, and the Armenian community.