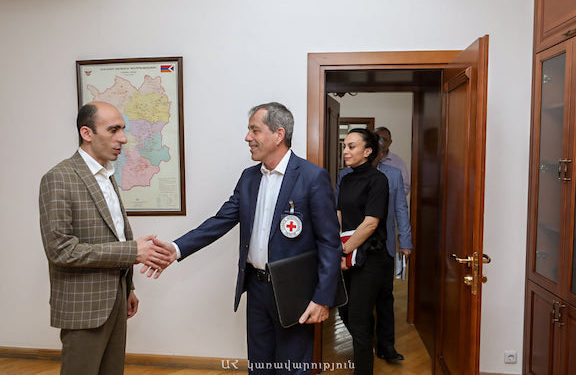 Artsakh’s State Minister Artak Beglaryan discussed the implementation of humanitarian programs with the head of the International Committee of the Red Cross Mission Karabakh mission Bertrand Lamon who was in Stepanakert on Monday.

Beglaryan praised the ICRC’s active efforts in implementing humanitarian programs in Artsakh and emphasized the coordinated work of the Artsakh government and the ICRC mission, especially in addressing effective solution to a number of post-war problems, stressing the need to attract additional resources.

Lamon presented the ongoing programs in Artsakh in recent months, as well as his interest in the government’s approaches.

The sides attached importance to the further deepening of cooperation aimed at supporting the socio-economic development of vulnerable groups, healthcare, access to education and solution of other vital issues.

Meanwhile ICRC President Peter Maurer responded to a letter from President Armen Sarkissian regarding to the immediate return of all Armenian prisoners of war and civilian captives from Azerbaijan, the president’s office told Armenpress on Monday.

Maurer has assured that all issues addressed by Sarkissian were under his and his Organization’s full attention.

Maurer stated that since 1992 the ICRC has had a continuous practical presence in the region and from the very first days of the 2020 war it has provided a humanitarian aid, as well as expressed readiness to carry out further activity within the humanitarian mandate provided by the international community to the Organization.