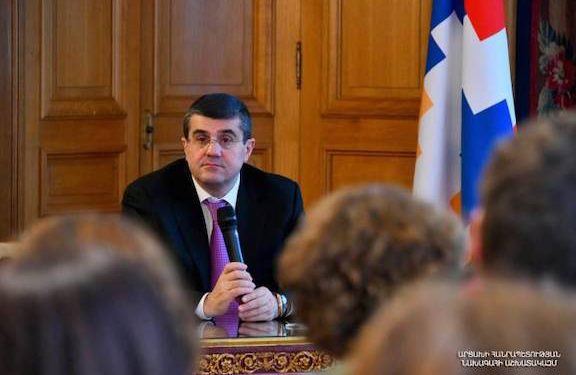 Artsakh President Arayik Harutyunyan during a press conference in Paris on Dec. 7

Artsakh President Arayik Harutyunyan on Wednesday provided a detailed briefing about Azerbaijan’s aggression against the Armenians of Artsakh and answered questions from leading French media outlets during his visit to Paris, where he also met with lawmakers.

Harutyunyan outlined the recent, as well as frequent, attacks by Azerbaijan on Artsakh and the humanitarian problems that have ensued, saying they pose a serious threat to the existence of the people of Artsakh in their own homeland.

He said that one of the objectives of his trip to France was to send a message to all European nations urging them to take measures to prevent Azerbaijan’s brazen aggression, which he said was undoubtedly supported by Turkey.

”We understand that Europe has oil and gas interests with Azerbaijan, but our appeal is to respect the right to self-determination and existence of our people and to prevent the advancement of the genocidal and expansionist policy of Azerbaijan with the existing tools,” Harutunyan said at the press conference

Following the press conference Harutyunyan sat down for an interview with Agence France Press news agency and was hosted by the France-24 television channel, according to the Artsakh presidential press service.

Weeks after the French Senate and the National Assembly both passed legislation condemning Azerbaijan for its aggression against Armenia and reaffirming France’s recognition of Artsakh, as well as calling on sanctions against Baku, Harutyunyan met with some of the lawmakers who advanced these initiatives in the legislature.

On Tuesday, Harutyunyan met with the leaders of all political parties represented in the French Senate and National Assembly.

The meeting touched on the Azerbaijani-Karabakh conflict settlement process, Artsakh-France relations and regional developments. Special emphasis was given to the development of inter-parliamentary ties.

Speaking of Artsakh’s interest in the development of relations with France, particularly its legislative body, Harutyunyan highly appreciated the consistent efforts of the Senate and the National Assembly aimed at settlement of the Azerbaijani-Karabakh conflict.

“The resolutions adopted by the French Senate and the National Assembly regarding Artsakh are a good basis for a comprehensive and permanent settlement of the conflict between Artsakh and Azerbaijan. Respecting the right of the people of Artsakh to self-determination and recognizing is the only way to settle the conflict, which guarantees the proper level of rights and security for the people of Artsakh,” Harutyunyan said.

He expressed gratitude to the lawmakers for adopting the resolutions, saying that the measures were in line with France political traditions, which he said are based on the principles of freedom, equality and fraternity.

Calling the legislation an important political message, Harutyunyan said that time has come to give the measures “real power.” He expressed hope that efforts to recognize Artsakh will be will serve an example for other nations to follow suit and are heeded by France’s executive branch, saying that would serve as a guarantee to prevent a new genocide of the Armenian people in their homeland.

Harutyunyan briefed the lawmakers on the recent threats to the Lachin corridor—the only road that connects Armenia to Artsakh.

“Azerbaijan wants to strangle Artsakh by cutting its only and ultimate link with the world,” said Harutyunyan. “We want the Lachin Corridor to have additional international guarantees to ensure the uninterrupted connection of Artsakh with Armenia and the external world.”
Harutyunyan said that Artsakh anticipates France’s active involvement in the implementation of humanitarian programs, the return of Armenian prisoners of war being held captive in Azerbaijan and the prevention of the destruction of endangered Armenian cultural monument in territories currently occupied by Azerbaijan.

Harutyunyan and his delegation met with the ARF Central Committee of France, with whose members issued related to the domestic and foreign policy of Artsakh was discussed. Cooperation between Artsakh and the Diaspora was also addressed.

Papazian was joined by his fellow ARF Bureau member Hovsep Der-Kevorkian at this meeting.

Harutyunyan said such meetings were important and useful and underscored the ARF’s contributions to the development and strengthening of Artsakh and other national priorities.