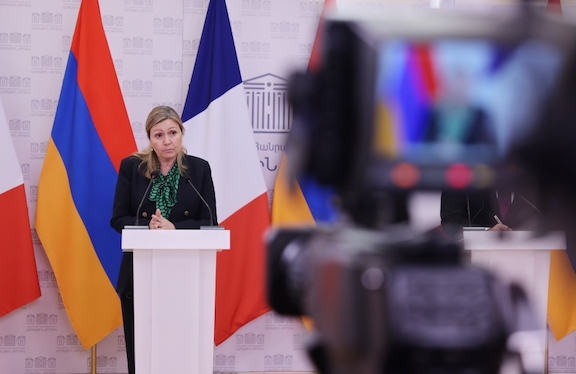 French parliament speaker, Yaël Braun-Pivet, who is visiting Armenia, expressed serious concern of Azerbaijan’s continuing blockade of Artsakh and called for the immediate reopening of the Lachin Corridor.

“We are concerned because the blockade is creating a worsening humanitarian situation [in Nagorno-Karabakh,]” Braun-Pivet said after talks held with her Armenian counterpart Alen Simonyan on Friday.

“It is very important that free traffic between Armenia and Karabakh and electricity and internet connections be restored,” she told a joint news conference. “We will do everything to avoid a humanitarian catastrophe.”

“As you know, France has always been alongside Armenia to strengthen the country’s sovereignty and independence,” she added.

The French National Assembly, which she leads, last month adopted a resolution reaffirming its earlier recognition of Artsakh’s self-determination and called on France’s government to impose sanctions on Azerbaijan for violating Armenia’s territorial integrity.

Yet when she was asked whether France will pursue sanctions, she said that restoring dialogue between Armenia and Azerbaijan toward a peaceful resolution was a more important option.

“Today we consider that the most important thing is the peaceful resolution and restoration of dialogue, all our efforts are directed to this. Today we believe that applying other measures is inappropriate as long as the path to possible peace and dialogue is not exhausted, as long as we haven’t tried everything in this regard. Our energy is 100 percent directed for this resolution,” Braun-Pivet said.

The French parliament speaker, who is from the same party as her country’s president, Emmanuel Macron, said that “France does not recognize the independence of Nagorno Karabakh, and this is in line with international law, which we are adhering to,” when asked whether the current blockade of Artsakh should serve as an impetus for that recognition.

She said that there were several options to achieve and advance normalization of relations between Armenia and Azerbaijan, one of which, she pointed out, was the OSCE Minsk Group co-chair process.

“The Minsk Group is one of the existing platforms for dialogue. Of course it’s not the only one, but it is a very important platform. And today it is very important that each member party to that platform agrees to return to that dialogue. And we, parliamentarians, call for a return to dialogue within the framework of the Minsk Group,” Braun-Pivet said.

While there are efforts to replace the Minks Group process, Simonyan, Armenia’s parliament speaker, nevertheless welcomed France’s efforts in advancing this option.

Earlier on Friday, Braun-Pivet visited the Dzidzernagapert Armenian Genocide Memorial and laid a wreath and paid her respects at the eternal flame.