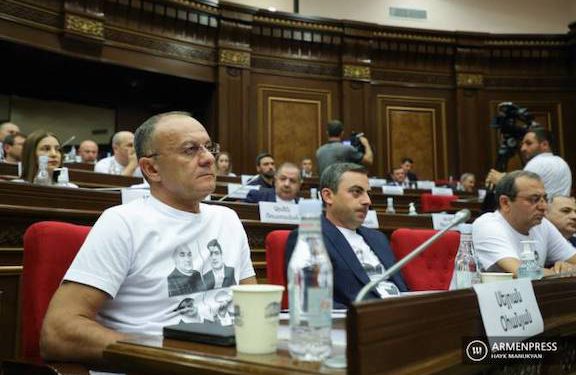 The inaugural session of Armenia’s new parliament convened on Monday as tensions rose when the opposition Armenia Alliance demanded the release of two of its members who were arrested in June. The Armenia Alliance called the arrests politically motivated.

The Armenian Alliance, led by former president Robert Kocharian and including Armenian Revolutionary Federation, argued that procedural rules were being violated since two of their members were not in attendance because they have been remanded into custody.

The former mayors of Meghri and Sisian in the Syunik Province, Mkhitar Zakaryan and Artur Sargsyan, were arrested last month for alleged abuse of power and fraud. They ran in the June 20 elections as part of the Armenia Alliance and were included in the list to fill the 29 seats won by the bloc. Two other former mayors from Syunik and Armenia Alliance supporters have also been arrested, in what has been criticized as the government’s crackdown and suppression of the opposition ahead of Monday’s parliament session.

The Armenia Alliance lawmakers wore T-shirts emblazoned with the pictures of the four arrested Syunik leaders as a sign of protest for their incarceration.

Armenia Alliance members argued that Zakaryan and Sargsyan were being deprived of their rights as lawmakers to take part in discussions on the election of the Parliament Speaker and other legislative leaders.

“It is an unusual situation,” said Armenia Alliance lawmaker Armen Rustamyan, who is also the president of the ARF Bureau.

“There has never been an inaugural [parliament] session where two members are under arrest and are unable to participate in the session and fulfill their duties,” added Rustamyan who insisted that as a result of the “gross violation procedural rules” the legislature should not move forward with its agenda.

Rustamyan said the absence of his Armenia Alliance colleagues is not only an infringement against the lawmakers but disrespect toward the parliament because during this session the committees and the leadership of the legislative are expected to be formed. He said the jailed lawmakers thus were being deprived of the opportunity to vote or be elected if they are not participating.

Ruling Civil Contract lawmaker Vladimir Vardanyan countered the opposition arguments by saying that Zakaryan and Sargsyan were arrested prior to the convening the parliament, thus the matter of parliamentary immunity, which is guaranteed to lawmakers, was moot.

The two opposition parties nominated Zakaryan and Sargsyan as candidates for parliament speaker.

“Our colleagues must be here and present their views on their nomination,” said Armenia Alliance bloc secretary and ARF Supreme Council of Armenia member Artsvik Minasyan. Or else, he said, the opposition will regard the election of the new speaker as “illegitimate and illegal.”

Following a recess and a snafu with ballots, the parliament elected controversial Civil Contract member Alen Simonyan as Speaker of the National Assembly. His was elected only by the 71 lawmakers in the Civil Contract party.

Soon after the inaugural session was called to order, President Armen Sarkissian signed a decree appointing Nikol Pashinyan as prime minister, in accordance to Armenia’s Constitution, which stipulates: “immediately after commencement of the term of powers of the newly-elected National Assembly, the President of the Republic shall appoint as Prime Minister the candidate nominated by the parliamentary majority…”

In his remarks to parliament, Sarkissian emphasized the need to find solutions for the multi-faceted and severe collectively, saying the new legislature has the opportunity to develop and implement future-oriented, real, strategic programs.

“Citizens of the Republic of Armenia expect that solutions to existing problems will be found and that you will display the will to guide Armenia toward advancement and the future,” said the president.

“That future must be shaped around a vision of a strong, balanced and progressive state. The future does not stem from the interest of any one individual or political party. All of us are the future as one entirety, united by a common historical memory, as well as our obligations before our children and our ancestors who for many centuries fought to have their own independent state. We are obligated to expressly realize and value the fact of the existence of our statehood,” said Sarkissian.

He said that everything must be done to defend and protect Armenia’s statehood. He said the essence of effective governance is being honest and responsible.

“Only honest and fair governance can change the situation and overcome despair, instill optimism, restore and strengthen the connection between the citizen and the state,” said Sarkissian. “Any attempt to present what suits [an individual or a party] as reality, demagogy and populism will lead to a dead-end.”