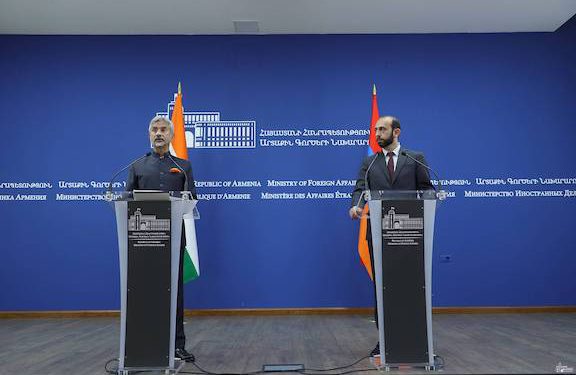 YEREVAN (Azatutyun.am)—The foreign ministers of Armenia and India pledged to deepen relations between the two countries sharing common geopolitical interests after holding talks on Wednesday for the second time in a month.

Foreign Minister Ararat Mirzoyan said he and his Indian counterpart Subrahmanyam Jaishankar reached “concrete agreements” to that effect during the talks held in Yerevan. He also reaffirmed Armenia’s support for India in its long-running dispute with Pakistan and praised New Delhi’s “principled” position on the Nagorno-Karabakh conflict.

Pakistan staunchly supports Azerbaijan in that conflict, refusing to not only establish diplomatic relations with Armenia but also formally recognize it. Islamabad underscored that support during last year’s Armenian-Azerbaijani war over Karabakh. But it denied claims that Pakistani soldiers participated in the six-week war on the Azerbaijani side.

By contrast, India has backed international efforts to settle the Karabakh conflict spearheaded by the United States, Russia and France. It has also effectively sided with Armenia in an Armenian-Azerbaijani border dispute that broke out in May this year. In a statement issued at the time, the Indian Foreign Ministry called on Baku to “pull back forces immediately and cease any further provocation.”

Mirzoyan recalled and hailed that statement during his joint news conference with Jaishankar. “For our part, we reaffirm our position in terms of supporting India on the Jammu and Kashmir issue,” he said.
Mirzoyan stressed that forging closer ties with India is one of Armenia’s foreign policy priorities. “We need to take joint steps to elevate our relations in the political, economic, military and cultural fields to a new level,” he said.

Prime Minister Nikol Pashinyan echoed that statement when he met with Jaishankar later in the day.
“We not only express readiness but also have concrete ideas and proposals regarding what we should cooperate [with India] on,” he said.

Jaishankar, who is the first Indian foreign minister to ever visit Armenia, told reporters that he and Mirzoyan approved a “roadmap for future cooperation and mutual visits at different levels.” He singled out closer economic ties between the two nations whose bilateral trade was worth only $128 million last year.

In that regard, both ministers, who previously met in Tajikistan on September 16, stressed the importance of establishing an Armenian-Indian transport link passing through Iran and its Chabahar cargo port in particular.

India has built and operates two terminals at the Gulf of Oman port to bypass Pakistan in cargo traffic with Iran, Afghanistan and central Asian countries.

New Delhi has also proposed Chabahar’s inclusion in the International North-South Transport Corridor (INSTC) project initiated by Russia, Iran and India in 2000. The project envisages a 7,200-kilometer-long network of maritime and terrestrial routes stretching from Mumbai to Moscow.
“We support using the Chabahar port and other initiatives that would expand links between our two countries,” said Jaishankar.

Mirzoyan said the Iranian port could be used for cargo shipments to not only Armenia but also neighboring Georgia and further north, to Russia and even Europe. He said Armenia and Iran are planning to sign an agreement on such freight transport.