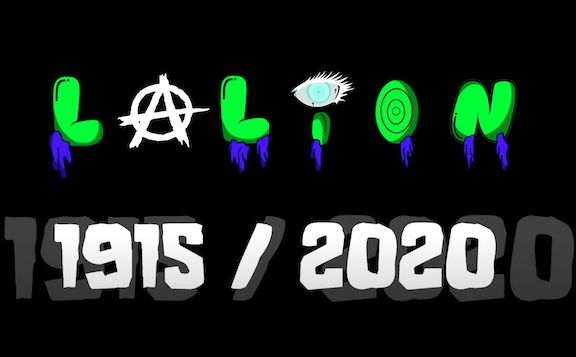 Grant Lalaian, whose stage name is LaLion, is an independent artist, hip-hop rapper, guitar player, and songwriter based in Seattle.

Anna Iskandarian recently interviewed Lalaian about his journey through music, family history, various projects he’s completed, raising awareness about Armenian causes to his fans, as well as his active involvement during the 2020 war in Artsakh.

Anna Iskandarian: When were you introduced to music and who inspired you?

Grant Lalaian: I was introduced to music at an early age. I started guitar lessons around 6-years-old after my parents gifted me a guitar for Christmas. The lessons began with my father teaching me what he knew, then he took me to group guitar lessons at a local community college filled with adults. As far as first inspiration, you could say my father would be my first inspiration. I’ve also been told that my grandfather Gregory was a good singer and wrote some poems. After that began my personal journey into discovering music, which started from Linkin Park and progressed into Nirvana, Eminem, Kanye West, Jay-Z, and Green Day.

A.I.: Which famous musicians do you admire?

G.L.: Mainly the ones mentioned above, as well as Kendrick Lamar, J. Cole, Drake, Twenty One Pilots, and many more.

A.I.: How would you describe the music that you create?

G.L.: The music I create is a combination of all my inspirations. It is a mix of rock, rap, and pop music. One of my goals is to create a combination of all these genres and establish a new style of music that no one has heard yet, but is still easily consumed and played on the radio.

A.I.: How did you start your journey and what roadblocks have you encountered on your way?

G.L.: My musical journey started at 6-years-old when I started playing guitar. Throughout my adolescence I would take guitar lessons and play small concerts (sometimes with my brother Arman Lalaian on drums) in coffee shops and various open mics. Then, around the age of 15, me and a few of my friends started a band together. We would go on to play together for around a year, but we eventually broke up. That’s when the first roadblock happened. At that point I was still very interested in creating and releasing music, but with no one to collaborate with I decided to buy a $20 microphone online and began writing and releasing music as a solo act.

A.I.: What is your creative process like to deliver lyrics, compose a song, and deliver the final work?

A.I.: Who would you most like to collaborate with in the future?

G.L.: Currently, I would love to collaborate with Drake, Kendrick Lamar, Eminem, Mike Shinoda, System Of A Down, and Rick Rubin.

A.I.: Can you tell me about the “Barev Dzes” music video, and who was involved in this production?

G.L.: The “Barev Dzez” music video was a family effort. The old man in the video is my Grandfather (Varazdat Baroyants), the young boxer is my cousin (Tigran Bagdasaryan), the referee is my uncle (Avet Boroyan), the two coaches are my brother and father (Arman and Michael Lalaian), along with them I had friends Eli Volynsky and Philip Kertsman help film.

It’s always great including family in my music production but its never easy. With everyone constantly giving input on how something should be done, it becomes incredibly difficult to direct the shot. But definitely worth it.

A.I.: On September 27, 2020, a large-scale war was initiated by Azerbaijan in Artsakh (Nagorno-Karabakh), which lasted until November 10. Most Armenians in the diaspora were actively providing their support and assistance during and after the war. How did you personally contribute to the cause as an artist?

G.L.: I did as much as I could to direct attention and get donations through my art. I released a song/music video titled “1915 / 2020” which portrays my thoughts on the war and my disgust with the lack of attention it was receiving around the world. The song makes connections between the 2020 war and the 1915 genocide. Along with the song, I designed several T-Shirts in another attempt at getting donations for Artsakh.

A.I.: Why do you think it’s important to learn about family history and pass it along to next generation?

G.L.: It’s always valuable to know where you come from. For me, my father’s roots come from Artsakh and my mother’s side from Western Armenia, Mush. To be able to understand the hardships and efforts it took to get to where you are today is something that must be passed down from generation to generation. Otherwise, we take what we have for granted. If you don’t know where you came from, you won’t know where you’ll go.

A.I.: Your Armenian family is originally from Azerbaijan. You were born and raised in the United States. Can you please share your family survival story?

G.L.: Both my parents arrived in the USA in the fall of 1991, my father’s family in Utah and my mother’s in Washington State. When the atrocities across Azerbaijan began, they beat my father’s parents so badly that my grandmother lost her eye and half her hearing, while my grandfather lost all his teeth. My father’s family was forced to leave their home to Russia, where they stayed with relatives for a short amount of time. After that they moved to Armenia, and a few weeks later the massive earthquake hit. The devastation from the earthquake caused the government to lose focus on providing aid to Armenian refugees from Azerbaijan, luckily my father found a job as an engineer and his company gave his family room to live in the basement of an abandoned building for three years. All through these three years, my fathers’ family was trying to immigrate to the USA, then finally they were allowed to.

My mother has a similar story, where her family was also beaten by Azerbaijanis in the pogroms of January 1990 and forced to leave their childhood home and escape from Baku. My mother arrived in Armenia three days before the earthquake lived at a relative’s home and later was happy to find place to live in an abandoned jail, not far from where my father’s family lived. Similarly, her family also waited three years before they were able to immigrate to the United States.

Both my parents arrived in the United States educated, but had little to no English experience. Having no money, they start to build their new life from scratch. Despite the odds, they were able to build a beautiful life for themselves and their family in the United States.

A.I.: You use different music and social media platforms and the amount of your followers has been rapidly increasing. How do you manage the process and what made you so successful?

G.L.: All this has been achieved through strict discipline. I currently still work a part time job, and just last year I received my Bachelor degree in Video Game Design after being a full time student for a few years. With that in mind, I have to plan my week almost hour by hour. One day is dedicated to finding sounds and making instrumentals, the next day will be writing/perfecting the lyrics and recording, and the next will be dedicated to mixing and mastering the song. I spend 95 percent of my free time working on music, every once in a while I’ll go spend a day hanging out with my friends, but usually I’m just working on music.

G.L.: Currently I am releasing a new song every Thursday and have been doing so for three years now. I don’t have a plan to release an album at this point, but who knows, maybe I’ll change my mind in the near future. My last mixtape (“Grape”) was released on October 15, 2020 and before that I released four other mixtapes (“Lime”; “Kiwi” which was a collaboration with my cousin Richard Agadjanian; “Generation of Sedation”; and “Mango”).

A.I.: Do you have any upcoming shows?

G.L.: Not currently. We will see what the world is like when everything opens up again. At this point in time, I’m not even sure people would want to come to a show due to COVID. But once life is back to normal, I’ll be playing regularly.

A.I.: If you could change anything about the industry, what would it be?

G.L.: In today’s industry, one of the biggest ways to reach large audiences is by being placed in curated playlists on streaming services. If I could change one thing, it would be the process of submitting music as an independent artist to these playlists.

Book Review: The Resistance Network: The Armenian Genocide and Humanitarianism in Ottoman Syria, 1915-1918