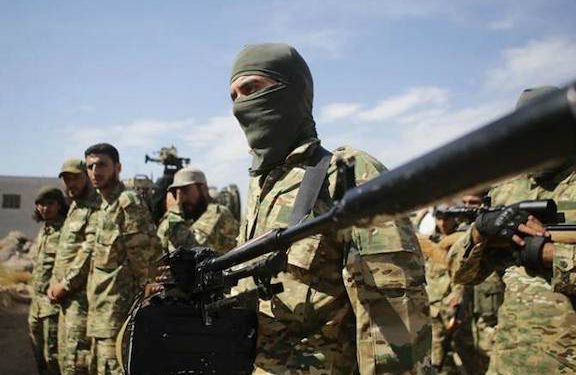 Turkey deployed Jihadist terrorists who fought alongside Azerbaijan during the 44-Day War.

Iran said that it possesses documents proving that terrorist groups have been sent to the Republic of Azerbaijan.

“Iran has even acquired their conversations, and has them on its intelligence radar,” said Iranian Foreign Ministry Spokesman Saeed Khatibzadeh in an interview on Tuesday with Iran’s national radio, reported the Iran Front Page news site.

“We told the Azerbaijani side that this is not acceptable, and their highest-ranking officials promised to allay our concern,” he said.

“Our relations with the Republic of Azerbaijan have been very cordial, good and multi-layered, and visits to both countries by official from both sides are ongoing,” the Khatibzadeh explained.

“There are some third parties in the region that do not want Iran and the Republic of Azerbaijan to have friendly ties. Accordingly, they release fake and untrue news and try to cash in on the sentiments of the people of both countries in order to advance their own objectives,” he added.

“In developments in the Caucasus, we have stressed that the rights of neighboring countries should be restored,” said Khatibzadeh. “However, we believe war was not the right method to realize this and stressed the need for diplomatic solutions,” he added.

“Iran and Russia helped push for diplomatic negotiations between the warring sides,” said Khatibzadeh in a reference to the 44-Day War. He then cited the approach adopted by the administration of Iran’s new President Ebrahim Raeisi.

“Among the priorities of the Raeisi administration is interaction with neighboring countries,” he explained.
“Between 70 to 80 percent of our trade transactions take place with neighboring and regional countries plus China,” he said.

“Our advice to those who want to look for terrorists is to take a good look around themselves,” Azerbaijan’s foreign ministry spokesperson Layla Abdullayeva said in a statement on Tuesday.

“Unfortunately, the Iranian Foreign Ministry does not give up its smear campaign against Azerbaijan. We categorically reject such accusations,” said Abdullayeva.

“We said this during the 44-day war and we emphasize once again that there were no terrorists in Azerbaijan. In general, as a country that has suffered due to terrorism, there has never been a place for terrorists in Azerbaijan,” said Abdullayeva, making yet another false statement, since during the war France, Russia and the United States all acknowledged and condemned the presence of jihadist terrorists that were deployed by Turkey fighting alongside Azerbaijan forces. Furthermore, terrorists captured by Armenian forces testified that they had paid to fight and kill Armenians.

Abdullayeva went on to claim that Azerbaijan did not need mercenaries, saying that the Azerbaijani army has more than 100,000 soldiers.
“Surprisingly, no such accusations were made by Iran during the war, and no such concerns were raised until a new government came to power [in Iran] after the war,” Abdullayeva said, adding that an “anti-Azerbaijan campaign” will not benefit Iran in any manner. This threatening statement is also false, since official Tehran, on many occasions, voiced concern over deployment of terrorists during the war.

She said Tehran has been resorting to “these baseless accusations” because Baku is preventing the “illegal entry of Iranian trucks into Azerbaijan,” referring to a month-long standoff on the Goris-Kapan Highway, where Azerbaijani forces are stopping and levying fines on, and even arresting Iranian drivers.

A war of words between Baku and Tehran has escalated in recent weeks, after Iran held military exercises on its northwestern border with Nakhichevan, which angered Azerbaijan and its president Ilham Aliyev.

As a result of the Tehran-Baku diplomatic row, Iran closed its airspace to Azerbaijani military aircraft flying to Nakhichevan, and has restricted access of Turkish commercial trucks into Iran.