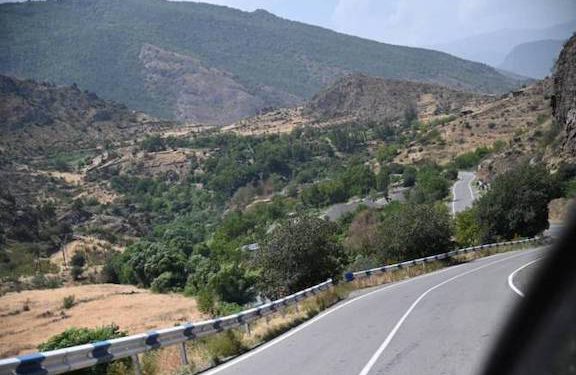 A section of the Goris-Kapan highway

Iran expressed hope on Friday that while addressing the immediate Goris-Kapan highway blockade issue, the resolution to the crisis at the border of Armenia and Azerbaijan will be resolved peacefully.

Iran’s Embassy in Yerevan responded to an inquiry from Armenpress on Friday, saying that it hoped that the current impasse would not hinder the talks on reopening the transportation routes and unblocking infrastructure in the region.

Pointing out that the latter issue is part of the provisions of the November 9 agreement and since talks started between the sides, the Iranian embassy said, Tehran has wanted an urgent resolution to the matter.

“We are hopeful that parallel to the ongoing negotiations over solving the existing disputes regarding the use of the Kapan-Goris route, the improvement and development works of alternative routes will swiftly take place, so that the conditions return to normal both from perspective of Armenia’s citizens and our commercial relations with Armenia,” the Iranian embassy told Armenpress.

On Wednesday, Azerbaijani forces blocked the vital Goris-Kapan highway, disrupting traffic not only for local residents, but also for cargo and commercial vehicles headed to Yerevan from Iran.

On Friday, through a mediation effort from Russia, the road was reopened and traffic has resumed on the stretch of the road.

An Appeal for Assistance to Armenians in Lebanon