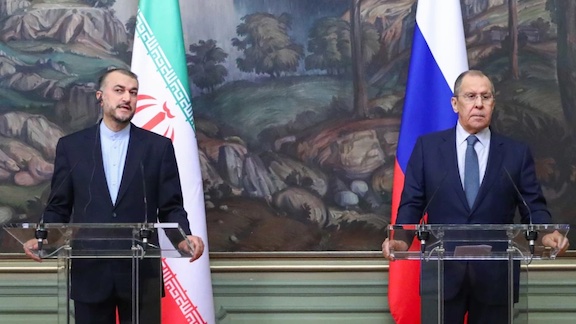 YEREVAN (Azatutyun.am)—Iran strongly opposes any redrawing of borders in the South Caucasus, Iranian Foreign Minister Hossein Amir-Abdollahian said after meeting with his Russian counterpart Sergei Lavrov in Moscow on Wednesday.

Amir-Abdollahian visited Russia amid Iran’s mounting tensions with Azerbaijan that followed Baku’s decision last month to levy hefty fees from Iranian trucks transporting goods to and from Armenia.
He said on his arrival in the Russian capital late on Tuesday that Tehran expects Moscow to “react to possible changes in regional countries’ borders.” He also echoed Iranian allegations that Baku is harboring Middle Eastern “terrorists” as well as Israeli security personnel near Iran’s borders.

Earlier on Monday, a senior Iranian parliamentarian reportedly accused Aliyev of trying to “cut Iran’s access to Armenia” with the help of Turkey and Israel.

The Azerbaijani leader has repeatedly threatened in recent months to forcibly open a land “corridor” that would connect Azerbaijan to its Nakhichevan exclave via Armenia’s Syunik province bordering Iran. All Armenian roads leading to Iran also pass through Syunik.

Speaking at a joint news conference with Lavrov held after their talks, Amir-Abdollahian reiterated that any “changes in the region’s map” are unacceptable to Iran. He indicated that the issue was on the meeting’s agenda.

The Russian foreign minister said they discussed “the situation in the South Caucasus” but did not comment on the unprecedented Azerbaijani-Iranian row. He said only that Moscow, which has deployed Russian troops in Syunik over the past year, is against any “provocative” war games in the region.
“Azerbaijan is expressing concern over recent military exercises held by our Iranian friends near its borders,” Lavrov told journalists.

Amir-Abdollahian countered that Azerbaijani and Turkish troops have held six joint drills in Azerbaijan so far this year.

Lavrov also stressed the importance of “unblocking all transport and economic links in that region” after last year’s Armenian-Azerbaijani war.

“That will benefit not only Armenia and Azerbaijan but also Georgia … as well as Iran, Russia and Turkey, the nearest neighbors of the three South Caucasus republics,” he said. “In this context, we discussed today the [Turkish] initiative to create a ‘three plus three’ format: the three South Caucasus countries and their three big neighbors: Russia, Iran and Turkey. Our Iranian friends have a positive attitude to this initiative.”

Amir-Abdollahian flew to Moscow on Tuesday one day after meeting with Armenian Foreign Minister Ararat Mirzoyan in Tehran. The latter accused Baku of misrepresenting Russian-brokered agreements that call for the opening of transport links between Armenia and Azerbaijan.

“In this regard, we highly appreciate Iran’s position on Armenia’s territorial integrity and the inviolability of its borders,” Mirzoyan said after talks with his Iranian counterpart.
Armen Grigoryan, the secretary of Armenia’s Security Council, likewise insisted on Wednesday that any road and/or railway connecting Nakhichevan to the rest of Azerbaijan would be under full Armenian control.

“There will be no sovereign corridor in Armenia,” Grigoryan told RFE/RL’s Armenian Service. “That is, Armenia will control its entire territory.”

Dr. Vartan Matiossian's Book on 'The Politics of Naming the Armenian Genocide' Published

L.A. Art to be Explored in Panel and Reception at Armenian Museum of America

Pashinyan to Meet with Aliyev, Erdogan in Prague