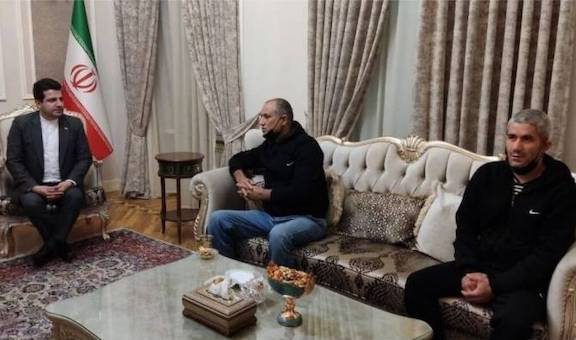 Shahroud Norouzi and Ja’far Barzegar have been released “based on good will, good neighbor relations, mutual respect, and human principles,” the IRNA state news agency reported cited a statement from Azerbaijani customs agency.

The drivers will return to Iran after going through legal formalities.
Earlier this month, Iran’s Foreign Ministry spokesperson Saeed Khatibzadeh criticized the arrests saying it did not conform to the principle of good neighbor relations.

Bagheri said that Iran and Russia have always supported each other in international matters, adding the there has never been misunderstanding between the two countries, as they have similar views on matters related to Syria, the Caucasus, the Persian Gulf and the Red Sea.

He added that Iran and Russia will hold a joint military commission meeting in Tehran in three months to discuss bilateral military ties, the defense industry, military agreements, the situation in Syria, security in the region and the fight against terrorism.

Similar sentiments were expressed by Russia’s Foreign Ministry spokesperson Maria Zakharova who told a press briefing on Thursday that Russia continued to support the reduction of tension on the border between Azerbaijan and Iran.

“We are certain that all the issues in the relations between the two countries only need to be solved politically and diplomatically and that any disagreements need to be resolved with the friendly-neighborly spirit,” said Zakharova.

“Russia is making efforts to unblock all economic and transport links in the South Caucasus, proceeding from the fact that the interests of all countries of the region, including those of Iran need to be taken into consideration,” she added.