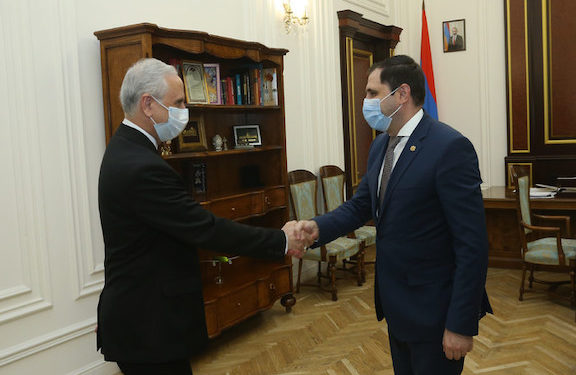 As Azerbaijani forces continue to stop and tax Iranian truck drivers on the Goris-Kapan Highway in Armenia’s Syunik Province, Iran’s Ambassador to Armenia Abbas Badakhshan Zohouri on Wednesday met with Deputy Prime Minister Suren Papikyan to discuss the ongoing standoff that has impacted trade between the two countries.

Papikyan briefed the Iranian diplomat on the progress of construction of alternate routes that would allow Iranian drivers to bypass the Azerbaijani patrolled section of the Goris-Kapan Highway.

Papikyan said that construction of a road between Tatev and Kapan would be completed by the end of November and another road connecting Tatev to Aghavni is also being build. The deputy prime minister said that construction had also started on a road from Tatev to Ltsen, saying that this road will bypass the curves and turns in Tatev and will be more convenient for large trucks.

Zohouri was told that a bypass road will be built in the Vorotan-Goris section. Touching upon the issue of the Sisian-Kajaran section of the North-South highway, Papikyan said that a tender has been announced for the construction of the project.

Azerbaijan’s impediments on the Goris-Kapan Highway has also created a diplomatic dustup between Iran and Azerbaijan, whose president, Ilham Aliyev, in an interview with the Turkish Andolu news agency, admonished Tehran for holding military exercises on Iran’s northwest border, saying that Iran was upset over Baku’s decision to fine and tax its drivers.

Iran’s Foreign Ministry Spokesman Saeed Khatibzadeh said on Tuesday that the military drills held in northwest of Iran were a matter of his country’ sovereignty and were held to fortify peace and stability in the region, the state IRNA news agency reported.

On Wednesday, Iran’s Embassy in Armenia posted a link to an article published in the Iranian Jom-e-Jam newspaper that was extremely critical of Aliyev and his regime, saying “the non-diplomatic behavior of Azerbaijan’s president and addressing a message to Iran through Turkish media is nothing but a sign of being colonized.’’

The article goes on to say that, “unlike Baku and Ankara, Armenia has no empty ambitions toward Iran’s border and has not demonstrated such behavior.”

The article added that “unlike Azerbaijan, Armenia is not an ally of Israel,” and accused Azerbaijan of creating a network of mercenary-separatists in Iran’s Azerbaijan Province in northwest of the country.