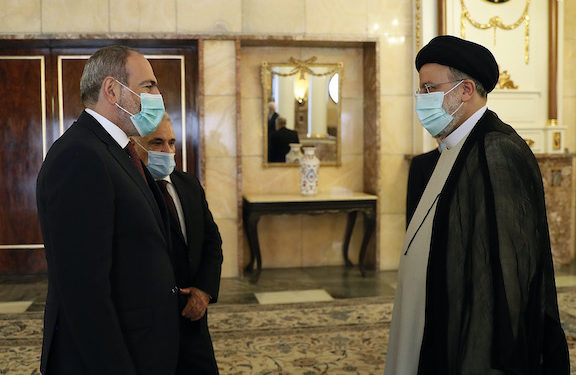 Tehran fully supports Armenia’s sovereignty over roads and transportation, reaffirming an earlier position that in the process of opening transit the territorial integrity of the countries involved must be protected.

This was expressed by Iran’s President Ebrahim Raisi during a telephone conversation with Prime Minister Nikol Pashinyan on Monday.

“The sensitivity of the situation in the Caucasus region requires that the countries of the region regularly discuss regional and bilateral issues. One of the key directions of the policy of the Islamic Republic of Iran is supporting the territorial integrity and sovereignty of the countries. In this sense, Tehran supports Armenia’s sovereignty over all roads passing through that country,” Raisi told Pashinyan.

Reportedly, Tehran also welcomed the progress in the negotiation process between Armenia and Azerbaijan. Iran’s president expressed hope that the problems between the two countries will be resolved peacefully on the basis of international principles. “We support the unblocking of roads,” Raisi said.

Pashinyan and Raisi also “discussed a number of issues on the agenda relating to the future development of the Armenian-Iranian relations,” the prime minister’s office said in a readout of the call.

“The importance of close cooperation of the governments of the two countries aimed at strengthening economic ties was underscored. Nikol Pashinyan and Ebrahim Raisi also touched upon the processes taking place in the region,” the statement said.

Raisi also congratulated Pashinyan and the Armenian people on the New Year and Christmas holidays. “In turn, Prime Minister Pashinyan congratulated the Christians of Iran on New Year and Christmas and thanked the Islamic Republic of Iran for creating the necessary conditions for preservation of identity of the Armenians of Iran. The interlocutors agreed to continue high level contacts between the two countries,” added the statement.

The flights will be operated twice a week, on Tuesdays and Saturdays.