Iran’s Transport Links With Armenia to Be Restored 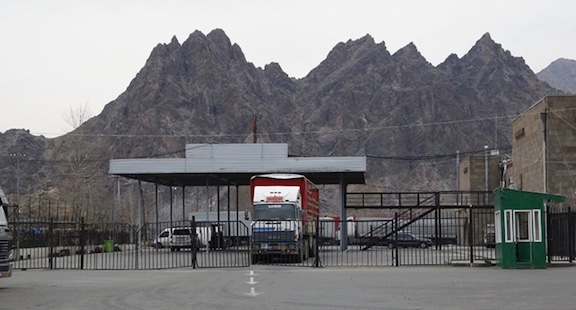 A cargo terminal at a border crossing with Iran

YEREVAN (Azatutyun.am)—Iran’s minister of roads and urban development indicated on Thursday Iran will fully restore soon its transport links with neighboring Armenia which have been disrupted by an Azerbaijani checkpoint setup on the main road connecting the two states.

In a Twitter post, Rostam Qassemi predicted a complete change of “the transit map of the region.”

Qassemi’s deputy Kheirollah Khademi visited Armenia earlier this week to discuss with Armenian officials the ongoing reconstruction of an alternative road in Armenia’s Syunik province which will allow Iranian trucks bypass the Azerbaijani roadblock. Khademi said Tehran is ready to help Yerevan refurbish this and other Syunik roads leading to the Iranian border.

Khademi said on his return to Iran that work on the bypass road will be completed soon. Speaking with reporters at the Nurduz crossing on the Iranian-Armenian border, he said Iran and Armenia also reached agreements on extending that road northwards.

“Thanks to special instructions issues to the deputy minister, the issue of the road running from Nurduz to Armenia and the Caucasus corridor will be solved,” tweeted Qassemi.

“Those who caused problems must know that no road can remain closed for us. But ‘burned bridges’ will not be restored easily,” he said in an apparent message to Azerbaijan.

Azerbaijani police and customs set up the checkpoint there on September 12 to levy hefty fees from Iranian trucks transporting cargo to Iran. Tensions between Tehran and Baku have run high since then.

A senior Iranian parliamentarian reportedly accused Aliyev on Monday of trying to “cut Iran’s access to Armenia” with the help of Turkey and Israel. Visiting Moscow on Wednesday, Iran’s Foreign Minister Hossein Amir-Abdollahian warned that Tehran will not tolerate any “changes in the region’s map.”