Journal of Society for Armenian Studies Releases Volume 28.1 on Theme of Performance 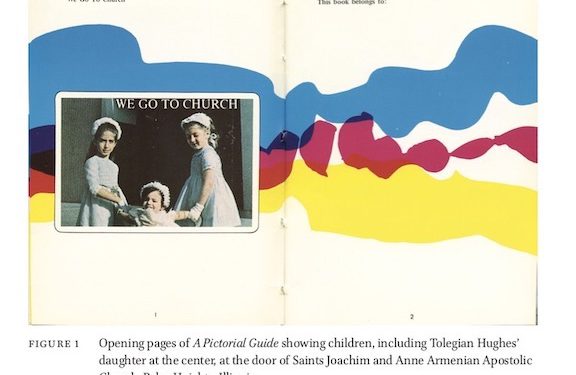 The Society for Armenian Studies announces the release of Volume 28, Issue 1 (Spring 2021) of the Journal of the Society for Armenian Studies, edited by Tamar M. Boyadjian (Michigan State University) and Rachel Goshgarian (Lafayette College) the Reviews and Reconsiderations Editor. This volume of the JSAS includes four articles, one film review, one museum review, the newly created Matenadaran Review of Books, seven book reviews, and one article in the newly created On Graduate Studies section.

The articles within this volume are centered around the theme of performance by examining the cultural and social engagements of Armenians, the positionalities of these performers, and how they produce change through the arts and humanities. Topics found within this issue include theater, film noir, music in the Armenian diaspora, liturgy and ritual, and the individual’s inner world.

The volume begins with Ayşe Kadıoğlu’s study of the departure of Eliza Binemeciyan, a prominent Armenian star of the theater, from Istanbul. Kadıoğlu’s article, “Leaving a Life Behind: Eliza Binemeciyan’s Encounter with ‘the Banality of Evil,'” details the decline of cosmopolitanism and the rise of nationalism and Turkification policies in Istanbul. By shifting the attention from Binemeciyan’s absence to her presence, Kadıoğlu highlights the impact that the actress had in creating and sustaining Istanbul’s theaters at the turn of the 20th century.

Kadıoğlu’s article is followed by Sylvia Angelique Alajaji exploring making music in the Armenian diaspora in the “The Soundscapes of Our Elsewheres,” a conversation with ethnomusicologist Lara Sarkissian. As a music composer, filmmaker, sound artist, and producer, Sarkissian delved into her Armenian experience and examined the ways in which it came to shape her art. Sarkissian discussed music and identity, “I don’t see this as visible or put out there, so why don’t I put this out there for my Iranian Armenian family and stories and see who that connects me to or who finds that also familiar to them.”

Kaveh Askari provided an in-depth study of crime films directed by Samuel Khachikian in “Samuel Khachikian and the Crime Thriller in Iran.” Askari discussed the mixed feelings brought on by the crime film genre in Tehran, Iran in the late 1950s and early 60s by dissecting Khachikian’s work. The small film community of midcentury Iran took part in constituting the global vernacular of film noir where one could according to Askari, “engage the promise of cinema, sometimes with playful enthusiasm about its possibilities and sometimes with a cynicism or anxiety about broken promises.”

In following a deep dive into an artist’s work, Greg Levonian explores the many forms of home, which permeate William Saroyan’s works. In “William Saroyan’s Dream of Home,” Levonian looks through Saroyan’s works including, “Hello Out There,” “The Time of Your Life,” “The Beautiful People,” and “The Cave Dwellers” to showcase hope for the hopeless and adrift. By analyzing Saroyan’s depictions of home in his works, Levonian depicts hope to symbolize fresh beginnings and possibility – factors which make our existence worthwhile.

Arto Vaun recounts visiting the The Parajanov Museum in Yerevan in, “A Museum, a World, a Poem: The Parajanov Museum as an Answer to Disorientation,” where Vaun embraces the artwork of Parajanov and draws deeper connections to his personal experiences and current affairs in Armenia. Sergei Parajanov’s inner world could be seen through his collages displayed in the museum – where his mind was free to roam past his immediate imprisonment and the rules of social realism dictated by the Soviet Union. The Parajanov Museum is one that is the most “soulful and sublime space” for Vaun, who depicts his countless visits to the colorful and full-of-life museum as a comforting space during difficult times. In finding meaning and reason within Parajanov’s art, Vaun adds, “Remember, before anything else, you are simply a human being! Don’t take yourself too seriously, and definitely don’t take others too seriously!” Vaun concludes his article by sharing a poem written at a young age on Parajanov’s “Self-Portrait with Haghpat in the Background, 1963”.

The final full-length article includes, “Performing Ritual, Ritualizing Performance: Objects that Act” by graduate students Elena Gittleman (Bryn Mawr College) and Erin Piñon (Princeton University). Gittleman and Piñon comment on the role of performance in their work and provide a theoretical framework for understanding objects in ritual. In one-part Gittleman and Piñon examine Lenore Tolegian Hughes’s, “A Pictorial Guide to the Badarak or Divine Liturgy of the Armenian Church,” which serves to inform and guide children by providing clear liturgical cues. In continuing their discussion, Piñon and Gittleman show, “the necessity, but also the difficulties, of bridging art history with theology, linguistics, anthropology, and performance studies – fields once considered tangential, or even well beyond it.”

Additionally Hayk Hambardzumyan, Head of Publishing of the Mesrop Mashtoc‘ Institute of Ancient Manuscripts shared the article, “The 2020 Publications of the Mesrop Maštoc‘ Institute of Ancient Manuscripts at the Matendaran in Yerevan, Armenia,” which provided a summary on books published in 2020 by the Institute. Books included in the summary and those from prior years could be read on the digital library section of the Matenadaran website.

In addition to these articles, Volume 28, Issue 1 also contains the following film review: Dana Sajdi’s review of Zeynep Dadak’s “Invisible to the Eye” (Ah Gözel İstanbul). Traditional book reviews included: Tara L. Andrews’ reviews of translations by Robert Bedrosian of various texts from Classical Armenian; Kate Franklin and Ani Honarchian’s review of David Zakarian’s “Women, Too, Were Blessed: The Portrayal of Women in Early Christian Texts”; Vigen Galstyan’s review of Tigran Amiryan’s “Firdus: The Memory of a Place”; Vazken Khatchig Davidian’s review of Gabriella Belli and Edith Devaney’s “Liberating the Artist or Controlling the Narrative? A Review of Arshile Gorky 1904–1948”; Joseph A. Kéchichian’s review of George A. Bournoutian’s “From the Kur to the Aras: A Military History of Russia’s Move into the South Caucasus and the First Russo-Iranian War, 1801–1813”; Sosy Mishoyan Dabbaghian’s review of Hagop Ayvaz’s “My Stage Friends” [in Armenian]; and Christopher Sheklian’s review of Lerna Ekmekçioğlu’s “Recovering Armenia: The Limits of Belonging in Post-Genocide Turkey.”

The journal concluded with final words from Bedross Der Matossian (University of Nebraska, Lincon) in the passage, “In Memoriam, Dr. George Bournoutian (1943–2021).” Der Matossian shared the loss of Professor George Bournoutian, one of the most prominent figures in the Society for Armenian Studies who had been a member since its inception. Bournoutian had played a key role in contributing to the development of modern Armenian history in the West. In speaking of Bournoutian’s legacy, Der Matossian described his scholarship as one that is essential for today and added, “Professor Bournoutian has departed but has left a major legacy, a legacy that future generations will cherish.”

Commenting on this issue Der Matossian, the President of the Society for Armenian Studies said: “The richness of this volume on performance is just breathtaking. It shows how JSAS has become one of the most important mediums for publishing first class articles in the field of Armenian Studies. This would not have taken place without the visionary approach of Tamar M. Boyadjian (Michigan State University) and Rachel Goshgarian (Lafayette College) the Reviews and Reconsiderations Editor. Their dedication and commitment to advancing the field of Armenian Studies is astounding.”

The table of contents for JSAS 28 (1) can be accessed online.

The Journal of the Society for Armenian Studies is a peer-reviewed journal and is published bi-annually by Brill. The Journal can be accessed online. If you are an SAS member, please contact SAS Executive Secretary Katarina Terzyan via email at execsecretary.sas@gmail.com for either a print copy or online access to the volume. Copies of the latest volume, and back issues, are also available by contacting the SAS Executive Secretary, or can be ordered online.