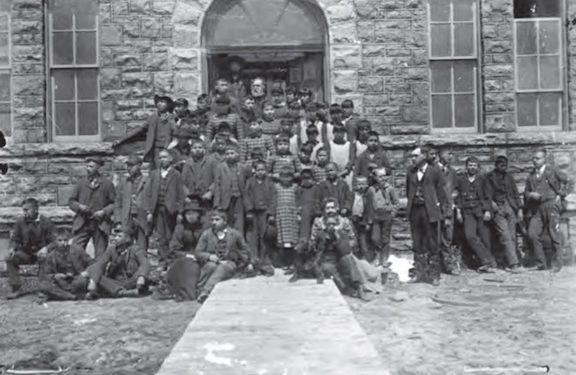 “This year’s thematic volume holistically came to fruition through the work of scholars in and around the field of Armenian Studies who have begun to think about the notion of indigeneity as it relates to Armenians living across Anatolia, the diaspora, the Republic of Armenia, and Artsakh (Nagorno-Karabagh),” wrote Boyadjian.

Nelli Sargsyan (Emerson College) leads the articles section with her work “(Un)Tethering Indigeneity: The Colonized, Settlerized, Nationalized, and Something Else,” in which she explores a queer feminist reinterpretation of an Armenian fairy tale as “an opening for healing Armenian necrophilic indigeneity and orienting toward the preciousness of life.” The volume delves deeper into the history of Armenian indigeneity in “Kill the Armenian/Indian; Save the Turk/Man: Carceral Humanitarianism, the Transfer of Children and a Comparative History of Indigenous Genocide” by Keith David Watenpaugh (University of California, Davis) by focusing on the transfer of indigenous children by state authorities to argue that the ideology and practice of modern humanitarianism is a definitive shared element of indigenous genocides across the late-19th and early-20th centuries.

Closing out the articles section, Simon Maghakyan (Visiting Scholar, Tufts University) examines whether a more pronounced indigenous identity can help to resolve the existential issue of preserving the tangible heritage of Armenians in “Is Indigeneity Discourse Productive for the Cause of Preserving Armenian Cultural Heritage?” Maghakyan states that indigenous identity can help Armenians, if engaged constructively, and urges Armenian stakeholders to seek attainable solutions to ensure the continuation of the Armenian heritage for the next seven generations.

The volume also includes Dr. Arpineh Saribekyan’s review of the 2021 National Gallery of Armenia exhibition entitled, Սա-նրանից-հին “[SA-NRANITS-HIN; Older-Than-That-One]” where she takes up questions related to works by generations of Armenian artists who depicted the late medieval sister monasteries of Haghpat and Sanahin. In addition, Murat Cem Mengüç reviews the comprehensive collection of essays titled “Artsakh: Cutural Heritage Under Threat,” published by the online arts magazine “Hyperallergic” in response to Azerbaijan’s campaign of erasing Armenian heritage in Shushi. The essays expose “the international community’s lack of understanding of the relevance of the most recent Azerbaijani aggression” in a mixed scholarly and journalistic nature.

Following the war waged on the indigenous lands of Artsakh (Nagorno-Karabagh) – the JSAS adopted a new section in the journal entitled Telegrams where artists and scholars were invited to contribute short reflections on the impact of both this war and the COVID-19 pandemic on their artistic productions. This issue preserves this section by inviting further etches to be inscribed with another Telegrams section, where artists and scholars were asked to reflect on particular spaces of Armenian indigeneity.

Igor Dorfmann Lazarev explores Baku in the 1970s, where he describes hearing Armenian on the streets even though “this was but an echo of times bygone” and explores his family’s roots within the city which spanned back to the second half of the 19th century. “The imprints of flight and longing lingered in Baku between the dense shadows that poplars and mulberries and plane trees cast on the hewn surfaces of its houses,” wrote Lazarev.

Journeying onto Vakıflı, Turkey, Anoush Gavour took comfort in the “familiar colors, smells, movements, and excitement of the Easter celebration” within the city. “Missing my family and my annual Easter traditions, I was surprised by the ease with which I worshipped within the walls of the town’s Armenian church and rejoiced among my own people in its courtyard,” added Gavour.

Lastly, the journal concluded with a profound and heartfelt reflection by Dr. Christina Maranci on the life and work of the prominent and influential scholar of Armenian art, Dr. Lucy Der Manuelian – the loss of whom deeply saddened the Armenian Studies community. “Professor Der Manuelian was not only a teacher and fundraiser; she was a scholar of Armenian art in her own right. Her dissertation on Geghard remains one of the few monographs on that extraordinary site, and also one of the few English-language books on Armenian bas-relief sculpture,” wrote Dr. Maranci.

“It is both an honor to be working on this journal and especially working with Reviews & Reconsiderations Editor, Dr. Rachel Goshgarian. I am also grateful for the continuous support of our SAS president Dr. Christina Maranci,” said Boyadjian. She went on to add, “The JSAS is committed to the promotion of Armenian Studies as a growing field with developing global, transcultural, and interdisciplinary conversations. We have moved also towards the direction of publishing both traditional academic articles, but also setting these in conversation with contemporary Armenian writers, artists, and visual storytellers in both the diaspora and the Republic of Armenia.”

The table of contents for JSAS 29 (1) can be accessed online.

The Journal of the Society for Armenian Studies is a peer-reviewed journal and is published bi-annually by Brill. If you are an SAS member please contact the SAS Executive Secretary, Katarina Terzyan by email at execsecretary.sas@gmail.com for either a print copy or online access to the volume. Copies of the latest volume, and back issues, are also available by contacting the SAS Executive Secretary, or can be ordered online.