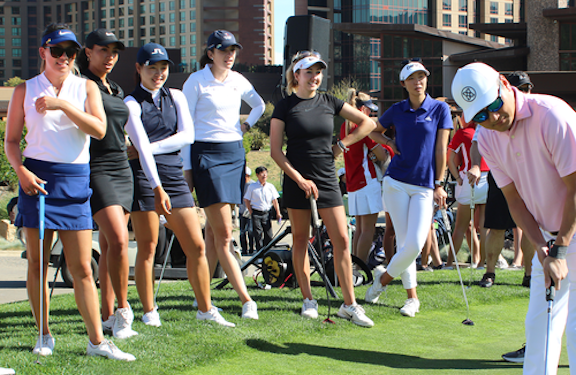 Journey at Pechanga hosted Character Media’s 14th Annual Pro-am Golf Tournament April 5 and 6. This marks the 8th year the championship course set amid the Temecula rolling hills hosts the tournament as the official sponsor. The event skipped the 2020 event due to COVID-19. This year, the tournament teed off with more than 26 talented LPGA golfers and VIP guests under Pechanga’s continued health and safety protocols. Journey at Pechanga is Pechanga Resort Casino’s premiere championship golf course, already well known among many Asian golfers.

Mi Hyang Lee, Rolex Ranking 67, started playing golf when she was just 3 years old. By the time she reached her late teens, she was one of the top amateurs in the country. Her T6 finish at the 2020 ISPS Handa Women’s Australian Open was a season-best result.

Angel Yin, Rolex Ranking 69, started playing golf at the age of six and became the youngest to play in the U.S.  Women’s Amateur when she was 12. She has recorded three top-10 results including the best result of her LPGA career in a major with a runner-up finish at the U.S. Women’s Open.

Bronte Law, Rolex Ranking 78, graduated with a degree in sociology from UCLA in 2017 alongside fellow Tour member Alison Lee. She has crossed the $1 million mark in career earnings when she became a Rolex First-Time Winner at the Pure Silk Championship in a wire-to-wire victory.

Chella Choi, Rolex Ranking 92, had recorded a season-best T17 result at the Cambia Portland Classic. She is also one of 12 players to record an ace on Tour in 2020.

The night before the tournament, sponsors found out which LPGA Pro golfers they will be playing. The tournament began at 10 a.m. on Tuesday following the limited interviews with members of Asian media. Players competed in an 18-hole scramble tournament and the team with the lowest score will win the coveted CM Pro-Am Cup. Through the tournament, tee sponsors were able to swing their clubs alongside these talented golf athletes. Participants also were provided with a great networking opportunity with celebrities, corporate leaders and pro golfers at the Awards Ceremony and Dinner that immediately followed the tournament.

Journey at Pechanga is now open with restrictions and limited use to maintain the health and safety of our guests, team members, and the community. To learn more about Journey at Pechanga’s COVID-19 safety policies, call 951-770-8210 or visit www.pechanga.com.

Journey at Pechanga championship golf course, one of the many high-end amenities at Pechanga Resort Casino, is consistently rated among the top public courses in California. When golfers partner their rounds with a luxury stay at the adjacent resort, the value of the experience rises. Please see Pechanga.com or call the resort ahead of a visit to ensure you have the most up to date health and safety protocols.