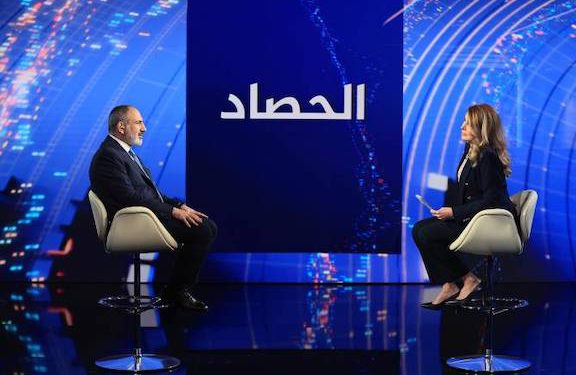 While on an official visit to Qatar, Prime Minister Nikol Pashinyan sat down for an interview with Al Jazeera

While in Qatar, Prime Minister Nikol Pashinyan told Al Jazeera that the so-called “corridor,” proposed by Azerbaijan, is unacceptable to Armenia and a “red line.” He also added that Karabakh is the “most urgent issues” in talks between Yerevan and Baku.

Pashinyan told Al Jazeera that the November 9, 2020 agreement was meant to stop the violence caused by the Azerbaijan’s aggression in Artsakh, adding, however, that the document did not address the Karabakh issue.

He explained that Armenia is engaged in diplomatic talks with Azerbaijan on several tracks.

“Recently we have established a commission for border delimitation between Armenia and Azerbaijan, and it is very important to continue that work. Only one meeting has occurred, but we have already agreed that a second meeting will take place in Moscow, the Russian capital, and the third meeting will take place in Brussels. And we hope that with the support of our international partners and of course through the direct work we will be able to delimit our borders,” he explained.

When asked what will Armenia’s position be if the border commission decides that the entire territory of Nagorno Karabakh should belong to Azerbaijan, Pashinyan explained that the Karabakh issue does not fall under the border demarcation process.

“The commission for border delimitation has nothing to do with the Nagorno Karabakh issue, because, as I said, we have different tracks with Azerbaijan. One track is border delimitation. Border security also is very important, and is under the mandate of this commission because we need to keep the stability and security alongside of our borders,” said Pashinyan.

He highlighted Russia’s role as the guarantor of the trilateral statement. “Russia is the strategic partner and ally of Armenia, but Russia is a very close country for Azerbaijan too,” Pashinyan said.

In discussing the so-called “corridor,” a scheme promoted by Azerbaijan that envisions a land corridor through Armenia connecting Azerbaijan proper with Nakhichevan and Turkey.

“The wording—the narrative of so-called corridor—is unacceptable for us, and it is red line for us,” asserted Pashinyan.

“Because in our region, according to the trilateral statement, which was mentioned in the beginning of our conversation, we have one corridor in our region, and this is Lachin corridor connecting Nagorno Karabakh with Armenia. But we have another point in our trilateral statement which is about the opening of communications, meaning, for example, railways and roads. We are ready to and we are discussing that actually, to open regional communications both for Armenia and Azerbaijan with the respect of sovereignty and the laws of our countries,” Pashinyan told Al Jazeera.

The Armenian prime minister also discussed the issue normalizing relations between Turkey and Armenia, saying thus far the dialogue has been “positive” and that Yerevan is hoping for “tangible results.”

Pashinyan also discussed the Ukraine situation and its political and economic implications for Armenia.

While saying that Armenia’s economy has registered growth in the last quarter, Pashinyan explained that Yerevan was carefully attempting to manage the challenges brought on by the Ukraine situation.

“Of course, it [the Ukraine issue] isn’t a pleasant situation in terms of economy for us. But to be honest, we had an 8.6 precent economic growth in the first quarter and we hope that we will be able to continue that dynamic. After the events in Ukraine many people and many businesses transferred from Russia to Armenia because we have mutual economic space and both Armenia and Russia are members of the Eurasian Economic Union,” explained Pashinyan.

He added that not only the economic situation in Russia directly impacts the Armenian economy, but also the fissures in the global economy connected with food supplies, inflation and other factors.

Pashinyan told Al Jazeera that Armenia is trying to be a direct, honest and reliable partner for Russia and for Yerevan’s European and Western partners, and to its neighbors.

Russia to Have Key Role In Transit Between Azerbaijan and Armenia