Karekin II Speaks Out Against Abuse of Power in Armenia 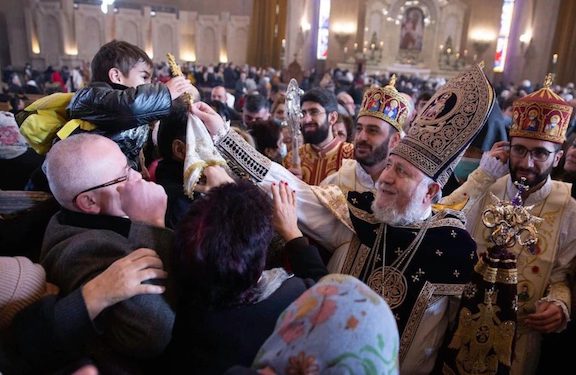 Catholicos Karekin II during Christmas Mass at the St. Gregory the Illuminator Cathedral on Jan. 5

YEREVAN (Azatutyun.am)—Catholicos Karekin II, the supreme head of the Armenian Apostolic Church, spoke out against abuse of authority in Armenia’s “public, political or state spheres” on Thursday as he celebrated Christmas Mass again shunned by the country’s leadership.

In a message read out at St. Gregory the Illuminator’s Cathedral in Yerevan, the Catholicos also renewed his calls for Armenians to stick to their Christian faith in the face of grave challenges confronting their nation.
“In the current difficult situation, we need to sober up, reject the paths that draw us away from God, firmly anchor our lives on the national and spiritual values that have been passed down through the centuries and guaranteed the survival of our people,” he said.

“Every position and authority in the public, political or state spheres must serve the progress of the country and general welfare and security; just as in a pious family. When a position ceases to be perceived as a service it turns into a cause of arbitrariness, of evil and unjust deeds,” added Karekin II.

He went on to make a case for a “new reality where mutual understanding and solidarity, uprightness and patriotism will prevail.”

“With this vision, by the grace of Christ’s salvation, dear faithful, let us transform the course of our lives, let us always walk the path of upliftment and loving life,” he said.

As was the case during the previous Christmas celebration, Prime Minister Nikol Pashinyan and members of his government were conspicuously absent from the liturgy held in Armenia’s largest cathedral.

Pashinyan’s frosty relationship with the Armenian Church has significantly deteriorated over the past year. The ancient church added its voice to opposition calls for his resignation in the wake of Armenia’s defeat in the 2020 war with Azerbaijan.

Pashinyan openly attacked the church when he campaigned for the June 2021 parliamentary elections. He said “corrupt clergymen” are part of Armenia’s traditional political, intellectual and spiritual elites that tried to prevent the 2018 “velvet revolution” which brought him to power.

The Catholicos’ office rejected the “unfair accusations,” saying that they reflect the Pashinyan government’s “attitude towards the national and spiritual values of the Church.”