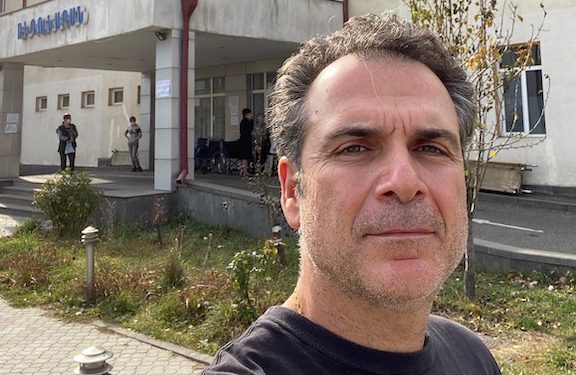 Dr. Shant Garabedian, an American University of Armenia supporter and medical doctor based in Tennessee, rushed to Armenia when the 2020 Artsakh War broke out. “I knew I wanted to be there to help. Though, I wouldn’t make the best infantryman, I could be valuable as an emergency doctor wherever the need was the greatest,” he recalls. Dr. Garabedian serves as the Medical Director at the Dyersburg Hospital Emergency Department. When the 2020 Artsakh War flared up in September 2020, he heeded the call to defend the homeland the best way he knew how, immediately volunteering his medical expertise to support the Armenian soldiers wounded at the frontline.

Born in 1970 in Beirut, Lebanon, Garabedian was raised in a highly-respected family of Genocide survivor-descendants. His father, born in Kharpert in 1920, would tell him stories about Shant’s grandfather who was spared from the Turkish atrocities because he was a talented blacksmith who could skillfully repair horseshoes. His mother was born in Aleppo in 1933 to an orphan, who was taken to the Birds’ Nest Armenian orphanage as a five-year old after her entire family was massacred during the Armenian Genocide. These and many related stories have stayed with Garabedian throughout his life and have grown in him the determination to succeed and dedication to his nation.

Settling in the San Francisco Bay Area in 1985, Garabedian was involved in the youth activities of the local Homenetmen, Armenian Youth Federation, and the Armenian Church. He gradually grew an impressive professional record of success, which includes an undergraduate degree in Physiology from the University of California, Davis; a degree in medicine from the Kirksville College of Osteopathic Medicine in Missouri, followed by a family medicine residency at the University of Tennessee program in Jackson, advancing all the way up to his current position as Medical Director of the Dyersburg Hospital Emergency Department in Tennessee.

Garabedian recounts his thoughts in the early days of the Artsakh War that started in September 2020. Determined to fly out as soon as possible, he thought he would be most helpful “within the first one or two hours of a soldier’s injury to bring to bear the initial stabilization.” He immediately began preparing for his trip establishing the necessary contacts, while acquiring from personal funds the necessary emergency room supplies to take with him. These included sutures, bandages, tourniquets, and IV kits, as well as endotracheal tubes for intubation, and bag valve masks for resuscitation. Advance arrangements in place and all packed, he was on a flight to Armenia on November 2, 2020.

Garabedian emphatically believes that it is the duty of every Armenian to serve the homeland however one can. “This is a matter of protecting our homeland, our sovereignty, our existence as a nation,” he admits as he explains the risk every serviceman takes of the unknown, the risk of not returning home, and also the risk of being permanently handicapped.

Garabedian was assigned to Goris since the Lachin throughway had closed by the time he arrived, barring safe passage to Artsakh. At the hospital in Goris, which functioned as back-up to the Khndzoresk mobile military hospital, Garabedian was involved in stabilizing the wounded soldiers brought there who would then be transferred according to the type of medical treatment or surgery they would need.

Garabedian was subsequently commissioned to Vardenis following the intensification of the fighting in Shushi, where he worked as an intensivist in both the civilian and military hospitals. “The military hospitals at Khndzoresk and Vardenis were well-prepared,” he recalls, “and had properly-trained medics to stabilize the wounded in the field.”

Garabedian speaks with deep emotion recounting his days in those hospitals and what he has witnessed. He then unequivocally commends the volunteers, all those dedicated men and women, young and old, as well as the soldiers who exhibited such heroism and bravery. “These young soldiers would be brought in very badly wounded, and they would plead with us to quickly patch them up so they would go back to the battlefield. These soldiers displayed immense camaraderie for their fellow servicemen in battle and were determined not to let them down, and ultimately not to let down their nation.”

Speaking to the future of Armenia, Garabedian believes the country needs to modernize its defense system and artillery based on a thorough analysis of the lessons learned from the 2020 Artsakh War. He wants to see Armenia “modernize our technology, especially in unmanned warfare, to be well-equipped and prepared to defend ourselves.”

Garabedian goes on to speak of the important role AUA is playing in educating the young generations and preparing them to lead the future. Making special reference to the new capital campaign, Build a Better Future With AUA, he is confident that a strong STEM education will significantly contribute to building a better and more powerful Armenia. Especially with the new labs and ancillary spaces to be built, the University will be even better positioned to educate the next generation of technologically-advanced young leaders. AUA will be in a superior stance and strength to engineer innovative drone solutions, tackle chemical-mechanical challenges, realize key transformations in electrical engineering, machine learning-based innovations, and much more.

Garabedian is a believer in the role of an AUA education, and in the shared knowledge and collaborative relationships that AUA cultivates with other universities and institutions. He is a proponent of expanding such relations, as well as research and development congruent with the long-term strategic goals of the University and those of the country.

He believes in the projected long-term solutions that an AUA higher education can provide, and wants all young people to have access to it, elaborating that, “specifically AUA, has the quality of education that is unsurpassed in Armenia, with a strong foundation in the UC system. Without this type of education, Armenia will stagnate and the country will not push forward. Armenia needs to become a powerhouse, and with the use of brain power as our ultimate natural resource, that could become a reality.”

Himself an AUA scholarship program supporter, Garabedian admits that the recent war has reawakened his belief in the urgency of empowering the next generation, preparing the leaders of tomorrow, and especially supporting our veteran students. Placing added emphasis on the need to amplify and further stretch the available sources of education, Garabedian recalls the benefits he had once received as an undergraduate student from the U.S. Federal Student Aid and asserts “there’s no reason why we couldn’t do the same to support our own Armenian youth. Today, we have veterans missing arms and legs, many who have gone through tremendous mental anguish and have developed stress disorders. Yet, they’re trying to make their lives better by aiming at a brighter future through education. The least we can do is to do our small part by supporting their education,” he urges.

As a diasporan himself, Dr. Garabedian calls upon all Armenians living in the Diaspora to contribute to this new ‘Build a Better Future with AUA’ campaign. “The easiest and least intrusive way for Diasporan-Armenians, and especially American-Armenians, is to help financially; this is the bare minimum we can do, for AUA and for each of those students to benefit from an AUA education.”

“We must now stand in remembrance of those who fell, but also with commitment to reinforce what we have and to strengthen our collective capacity to prepare the next leaders who will build Armenia.  Now, more than ever before, we need that powerful new force to get back up on our feet and build a technologically-advanced Armenia. I invite you to join me in this imperative national endeavor.”

Founded in 1991, the American University of Armenia is a private, independent university located in Yerevan, Armenia, affiliated with the University of California, and accredited by the WASC Senior College and University Commission in the United States. AUA provides local and international students with Western-style education through top-quality undergraduate, graduate, and certificate programs, promotes research and innovation, encourages civic engagement and community service, and fosters democratic values.