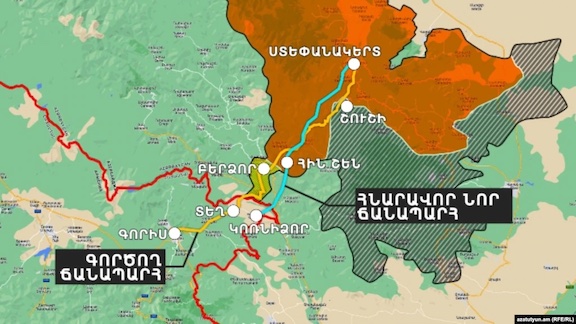 The map shows the new road and the current Lachin corridor (Azatutyun.am graphics)

Beginning at 8 p.m. local time on Tuesday, the Lachin Corridor, which for more than three decades has served as the main artery connecting Armenia with Artsakh, will be permanently closed to Armenian travelers. Instead, a new temporary road that bypasses the Aghavno and Sus villages in Artsakh’s Berdzor region will begin operating and will be monitored by Russian peacekeepers.

The closure comes weeks after Azerbaijan launched an attack on Berdzor, killing two Artsakh soldiers, and effectively forcing the authorities of Armenia and Artsakh, as well as the Russian peacekeeping contingent to give in to its demands and occupy the region ahead of the timeline outlined by the November 9, 2020 agreement.

The temporary road is slated to operate as “corridor.” The Russian peacekeeping leaders last week said that the new road will also have the legal status of a corridor.

According to Artsakh’s Interior Ministry spokesperson Hunan Tadevosyan, the Russian peacekeeping forces are currently finalizing their posts along the stretch of the road and will be ready by Tuesday.

Last week, Artsakh authorities announced that the Lachin corridor would remain open until the end of August 31. However, on Monday, the Artsakh Security Council decided to close that road earlier and reroute the traffic onto the temporary road.

Tadevosyan, the ministry spokesperson, said that there were no incidents during the past four days when there was simultaneous Azerbaijani and Armenian traffic.

Azerbaijanis entered Berdzor, Aghavno and Sus on Friday with loud fanfare. The first order of business for them was destroying the Berdzor sign and the entered Aghavno blasting Azerbaijani music. This was followed by a convoy Azerbaijani military personnel flooding the region, according to Azatutyun.am.

The Russian peacekeeping forces have fortified their presence within Berdzor.

Locals reported to Azatutyun.am that there is heaving military presence in Aghavno. In Berdzor, where Armenian vehicles also travel, there are unarmed Azerbaijanis. In the city, however, power supply and other infrastructure management workers were observed.

“The road leading from the northern portion of Kashatagh to the south or from the southern section to the north passes through the Berdzor corridor. Many vehicles pass through there, as well as through the city of Berdzor, from the upper part to the lower part. Since they [the Azerbaijanis] just arrived, at the moment there are probably infrastructure repair efforts,” Tadevosyan told Azatutyun.am, adding that situation will continue until Tuesday evening. The temporary road bypassing the corridor enters Stepanakert through the Mets Shen village of Berdadzor and past Old Shen. The construction was carried out by the Azerbaijani side.

According to Davit Davtyan, the mayor of Mets Shen, there are no services for travelers in this section of the new corridor connecting Armenia with Artsakh.